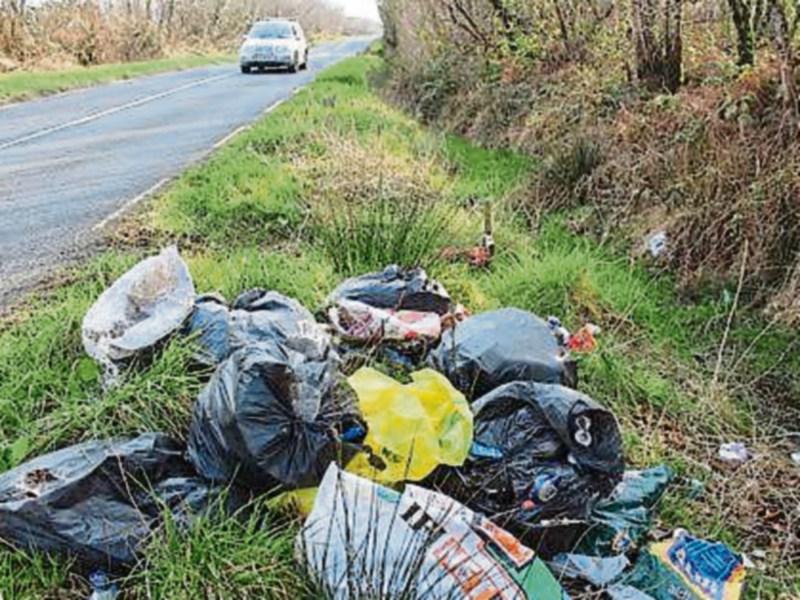 These are the shocking images which show how illegal dumpers have begun using a memorial site in memory of a road traffic victim as an indiscriminate fly tipping zone.

Local residents living along the main Castlepolloard to Edgeworthstown road are up in arms this week at the latest spate of aimless and haphazard dumping to visit the region.

More pertinently, they have hit out at the way large swathes of household waste has been left deposited at the scene of where a Polish truck driver lost his life.

One of those, local man Kevin Brady, was so disgusted at the eyesore which confronted him as he went about his daily business, he opted to take photographs of the scene and pass them on to the Leader.

“I live beside this. Ridiculous,  that is what it is, it can only be described as ridiculous dumping,” he raged this week.

“There is no respect for this person. A cross is there and it is quite visible to be seen that somebody has died in that particular spot. They seemed to have come along that road and dumped deliberately at that spot.”

As he gazed down on the images taken on his own personal camera, Mr Brady called into question the seriousness local authority officials were placing on the issue.

“I can’t understand if we have a litter warden in the county and they have been down that road because they have removed rubbish before Christmas on that same road,” he added.

“The litter warden would have had to have seen this.

“What is the litter warden doing? How are they justifying their jobs.

“Has this been reported by anyone else and what is proposed by the county council to do about it.

“This is a shrine, a mark of respect to a man who has died tragically in an accident and for this type of blatant disrespect at a mark of respect in this day and age just proves that there is no respect any more for people.

Environmental Awareness Officer with Longford County Council  Gary Brady confirmed a clean up of the area had been carried out earlier this week.

He also said litter wardens had been left “disgusted” by what they had seen, arguing the point the time had come to fine fly-tipping culprits at source.

“It's (illegal dumping) not a serious issue but is ongoing across the whole county,” he said.

“Where this (rubbish) was dumped (beside a memorial) though made it worse but if fines were taken out of incomes at source not only would it free up space in prisons but it would give back the punitive money to cover the costs of cleaning up rubbish that is dumped.”