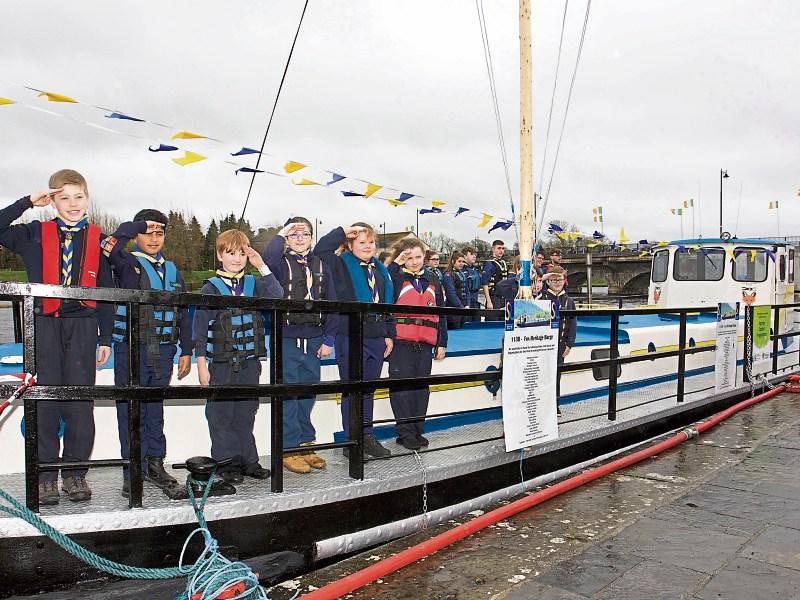 Last Saturday before a huge attendance on the quayside in Ballyleague the 12th Roscommon Scouts and Ballyboro Scouts hosted a memorable and very proud day when they relaunched the 113B – Fox barge.

This barge was built in McMillan’s boatyard in Dublin in 1937 and was purchased by Thomas Hughes, Athy, Co. Kildare for the conveying of cargo on the Grand Canal and River Barrow. The barge worked both waterways from 1937 until the late ’50 when CIE owners of the Canal ceased business.

From then until the early 2000’s the barge was used for the maintaining of the waterways by Inland Waterways. They say the hungry eye sees far and the local scout leaders identified the barge while it was tied up in Rooskey and they felt it was an opportunity was too good to miss if the barge could become available. Negotiations took place and in 2014 the licence agreement was signed by Scouting Ireland and Waterways Ireland, now owners of the boat.

The barge was towed to Hanley’s Marina, Ballyleague shortly afterwards and the refurbishment began. Three dedicated men from the local scouts namely Group Leader, Liam Kelly, Ass Group Leader and QM Tom Gill and Cub Leader Dermot O’Donohue set about the refurbishment programme which in itself was no small task considering the condition it was in.

Many things went to the background while those three men set about what became a labour of love. The scouts acknowledged the support of the Marina owners the Hanley family, Marine Surveyor Liam Sherringham The Heritage Council and the National Lottery Capital Grant and the many local contractors.

Group Leader Liam Kelly in his welcoming congratulated all that was involved and looked forward to the 113B-Fox being a vital component for the local scouts in the months and years ahead.

Liam welcomed Christ Mc Cann Chief Scot of Ireland, Dawn Livingstone CEO Waterways Ireland, David Kenneally Spiritual Leader of Scouts Ireland, Liam Hughes, Athy son of Thos. Hughes owner of the barge and his extended family, Scouts from 20th Dublin, Dundrum who were on the epic voyage onboard the barge in 1952 from Dublin to New Ross, previous members of the 113B, later named Fox Maintenance barge, Provincial and County Commissioners of Scouting Ireland.

Liam also remembered the sad loss of one of their members Ashling Brady who died during the course of the refurbishment.