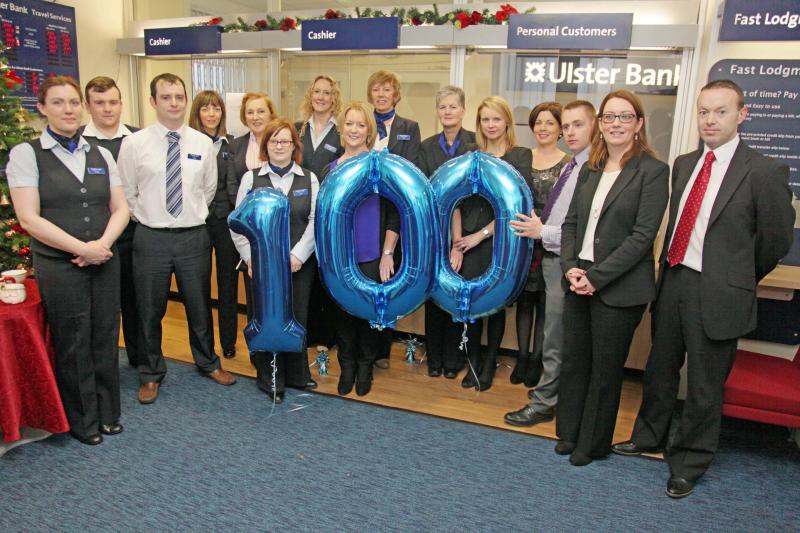 Celebrating a century of banking in Ulster Bank Edgeworthstown in 2015.

Ulster Bank in Edgeworthstown is set to close after providing more than 102 years of banking services in the Longford town.

The news comes just three years since Ulster Bank decided to close its nearby branch in Granard.

Ulster Bank today announced that it is to close twenty-two of its branches across the country, which will result in around 220 redundancies at the lender's Irish operation.

The affected branches include five in Dublin (Dalkey, Donnybrook, Dorset St, Rathmines, and Sandyford); four in Cork (Ballincollig, Blackpool, Carrigaline, and Fermoy); two in Donegal (Ardara and Raphoe); two in Cavan (Arva and Cootehill); two in Limerick (Castletroy and Newscastlewest); and two in Galway (Briarhill and Newcastle).

The other closures are Ballyhaunis in Mayo, Ballymote in Sligo, Carrickmacross in Monaghan, Edenderry in Offaly, and Edgeworthstown in Longford.

Ulster Bank said an average of 30 customers per day used each of the affected branches in the past week.

The closures are scheduled to take place in June and September and, when complete, will leave Ulster Bank with 88 branches in the Republic of Ireland.

Ulster Bank to close in Granard after 145 years

End of an era as Granard Ulster Bank closes