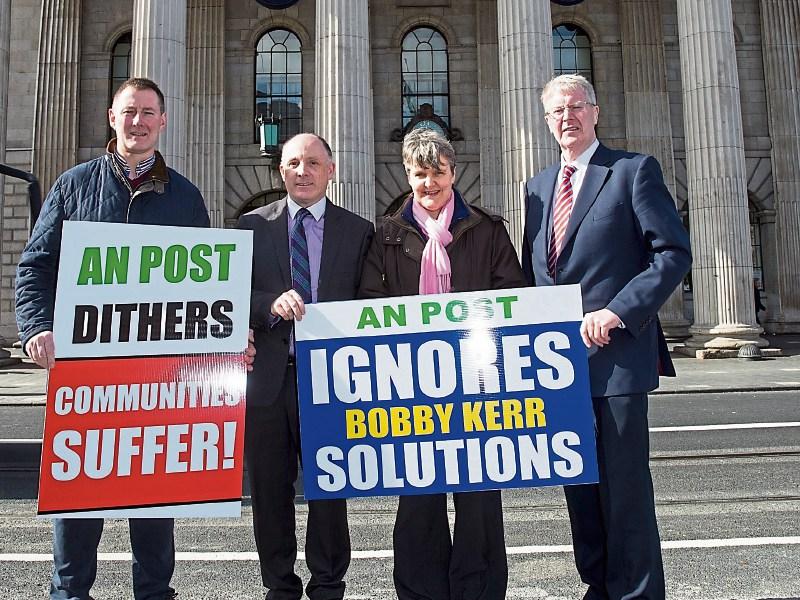 Postmasters are to hold fresh talks with An Post chief executive David McRedmond  this week over fears more than 200 offices across the country are earmarked for closure.

The move comes hot on the heels of a demonstration by around 60 postmasters outside the doors of the GPO in Dublin over the rumours.

Mr McNamara said he, together with his colleagues on the IPU's top table  will be looking for answers as to why An Post has so far failed to publish a report by businessman Bobby Kerr.

That report, commissioned by the Government, proposed up to 80 post office closures with a further review of loss-making post offices to be carried out in four years' time.

“This really is a double edged sword,” said Mr McNamara.

The Granard postmaster urged An Post to learn from the experiences of the British post office network where widespread closures impacted negatively on urban as well as rural settings.

“Obviously there are people (postmasters) that are looking to retire,” he said when asked about possible downsizing plans.

“But then there are people like myself who have a family and 30 odd years given to the service and to think it can be turned off like a light switch is worrying.”

Today's negotiations are also expected to have an added local feel, thanks to the presence of Irish Postmasters' Union general secretary Ned O'Hara.

The Granard native was quoted in some national publications earlier this month suggesting the number of closures mooted by Mr Kerr could be far higher than the 80 originally proposed.

O'Hara said consultants  McKinsey had been tasked with finding business solutions to An Post's current plight  but was not tasked with addressing the community and social services side of company.