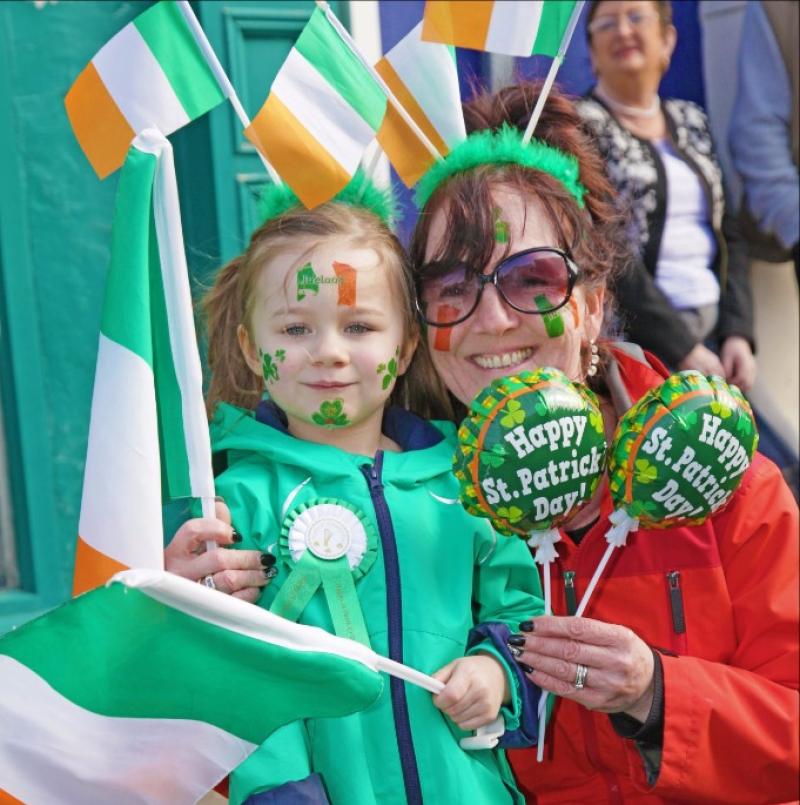 All eyes will be on the streets of Longford this Friday afternoon as the county town gears up for its much anticipated St Patrick’s Day Parade.

It all kicks off from 1pm with Siege of Jadotville veteran Michael Tighe leading proceedings from the front in his role as Grand Marshal.
Organisers have already confirmed a significant increase on entries from last year’s event, which was affected by the 1916 centenary parade that ran later in the year.
With Abbott Laboratories on board as the main sponsors and several of the local schools involved this year, Longford Chamber of Commerce is hoping for a good family-focused event.
Meanwhile local traders are being encouraged to take part in the shop window display initiative this year. As St Patrick’s Day falls on a Friday this year, the Chamber feels there is a real commercial opportunity for the town this year. Chamber CEO, Lisa Brady told the Leader: “We are putting a big push on getting traders and businesses to go green for the weekend this year. It doesn’t have to be overly elaborate but it would be great to see as many businesses as possible take part.”
There is also a special prize for the best display and Chamber Council member, Niamh Donlon has been out with traders, encouraging them to get involved.
She told the Leader: “The response has been very good and it will dovetail with the schools’ art competition as well.”
Whilst commercial entries are strongly encouraged in the parade, the Chamber is calling on local schools, community groups and organisations to get involved in the parade this year.
With the bank holiday on the Friday, many retailers and traders believe that it could be the busiest weekend in the county town since Christmas.
Ms Donlon added: “The parade and the shop window initiative are a great opportunity to put our best foot forward and show the town in a positive light.”
Meanwhile, the decision to name local man, Michael Tighe as the grand marshal for the parade has been warmly welcomed by the local organisation for ex servicemen, Peter Keenan ONE Longford.
In a statement, the group said: “The honour is thoroughly deserved for one of the branch’s longest serving members. This is a great honour not alone for Michael but also for the Peter Keenan branch of ONE, whose members will once again lead this year’s parade.”

The well-worn and somewhat clichéd adage of 'if it isn't broke don't fix it' might not be everyone's cup of tea but when it comes to this week's St Patrick's Day Parade in Longford, nothing could be more apt.
Much of that belief is per haps best summed up by the fact that not for the first time, Abbott Ireland have once again come on board as the occasion's main sponsor.
There's novelty too, in the sense that Friday's pageant will be new Chamber President, Derek Scanlon’s first parade in office, a spectacle the financial adviser is looking forward to with increasing gusto.
This week he thanked Abbott site manager, Ciaran Corcoran, and all the team at the Longford facility for their continued support. He told the Leader: “It is a big day for the town but it couldn’t happen without the support of Abbott in particular but also Longford Co Council and of course the Gardaí.”
Meanwhile Chamber CEO Lisa Brady said that interest in this year’s event has ramped up in recent weeks as the Chamber aims to give this year’s parade a carnival like atmosphere.
Whilst commercial entries are strongly encouraged in the parade, the Chamber sent out an appeal for schools, community groups and organisations to get involved in the this year. The response has been excellent with several new and first time entries for this year’s parade.
Last year was a tough one for the parade as many groups were committed to taking part in the 1916 centenary parade and as a result didn’t take part in the event.
According to Chamber CEO, Lisa Brady: “The parade is back this year bigger and better and there has already been a great response.”
The Chamber’s popular schools’ art competition for primary schools in conjunction with the parade has attracted record entries and it is hoped to display as many of the entries as possible on the big day.
In addition, the Chamber are also putting a big push behind the annual shop window display competition.
Businesses are urged to take part and help create an atmosphere in the town. With the bank holiday and the parade on the Friday it has the potential to be a0 busy weekend for the town so Chamber wants everybody to put their best foot forward this year.
For more information on the parade and details on taking part, contact Lisa Brady, Chamber CEO on 087 778 6834.