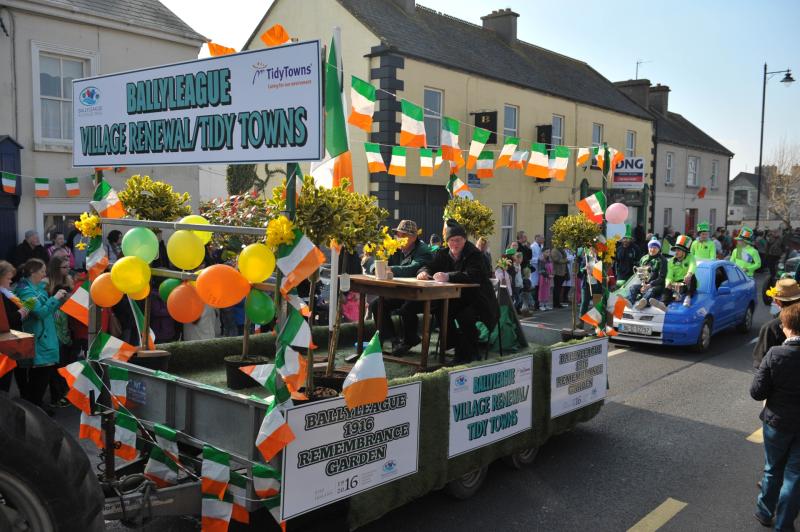 All roads will lead to Lanesboro/Ballyleague this St Patrick’s Day as all the stops are pulled out to bring the community one of the biggest and brightest parades ever witnessed on either side of the River Shannon.

And to top it all off, none other than the newly elected president of the United States of America, Donald J Trump will appear during the parade, which, with no theme this year is expected to become a blaze of colour and fun.
Proceedings kick off in the Shannonside towns on March 17 next at 11:30 am with traditional Mass at St Mary’s Church in Lanesboro.
This will be followed at 2:30pm by St Patrick’s Day parade which commences at St Faithleachs GAA club in Ballyleague.
During Mass the local choir will provide the song while local musicians will row in on the day and step dancer Clodagh Grey will take to the floor.
A viewing stand will be made available at the parade’s halfway mark and this will be home to local musicians and distinguished guests on the day.
“This year’s parade will be adjudicated upon by an independent judge and we have some wonderful prizes up for grabs,” organiser Teresa Costello said before pointing out that the committee did not confine this year’s efforts to a theme, hoping this would ignite creativity and colour.
“Terry McLoughlin - our local butcher will roast a pig on a spit for local charity, and I want to take the opportunity to thank the many people and sponsors who have helped out.”
Special thanks goes to the local committee members, stewarts, local business people and to all sponsors including Longford Co Council which provides its backing to the Lanesboro/Ballyleague St Patrick’s Day parade every year.
Prizes on the day include Overall Winner; Most Original Float; Best Business Float; Best Junior Float; Best Vintage Float; Best Window and Most Original Float.
“This is a huge day for the people of Ballyleague and Lanesboro,” continued Ms Costello, adding the committee was also delighted to welcome John L Farrell on board following his retirement from the local Tidy Towns committee last month.
“This year’s festival will be great craic and full of colour, and we will also have €500 worth of raffle prizes up for grabs in Joe Farrell’s pub at the end of what will be a very exciting day.
“We are all looking forward to St Patrick’s Day in Ballyleague and Lanesboro.”