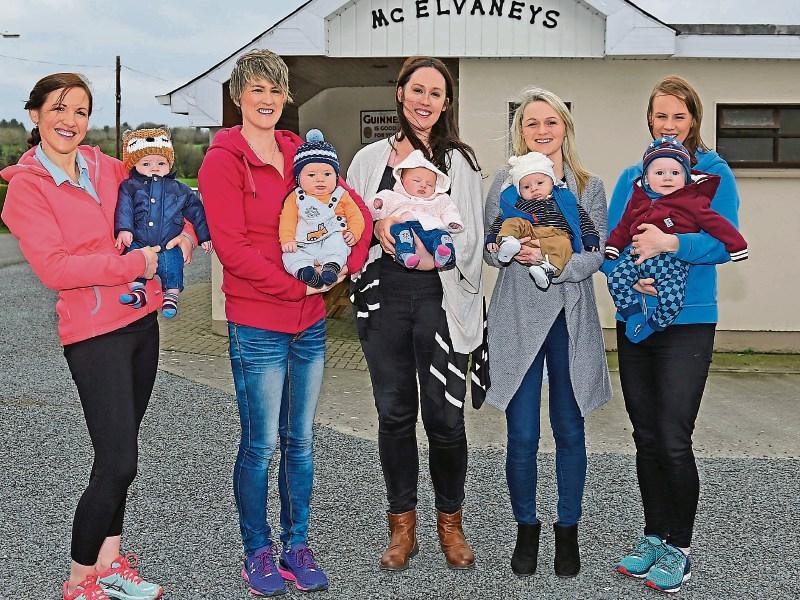 One Longford family is enjoying the pitter patter of half a dozen pairs of tiny feet following six new births in the space of just four months.

Joanne Kelly, Úna Mullen, Michelle O’Neill, Michelle McElvaney, Carmel Reynolds and Edel Stanley are first cousins, and each has given birth to a bouncing bundle of joy within the past few months.

Five of the new mums are currently living in Longford, with Edel and baby Elise residing in Switzerland.

“We all grew up very close, geographically,” Joanne Kelly told the Longford Leader this week.

“My mum and all her siblings always lived very close together, so the six of us grew up together and we were very close.”

Joanne’s baby girl, Lucy, was the fifth of the six births, and the first girl of the group -the previous four cousins gave birth to baby boys.

“I was glad when Edel had a girl after me, because Lucy would be surrounded by boys otherwise,” she laughed.

But, despite the six mothers being so close, the synchronised pregnancies were not planned - it was purely coincidence that they wound up expecting within months of each other.

“It was a running joke in the family. Everyone asked if we’d planned it,” said Joanne.

But having five other cousins going through pregnancy all at once proved very helpful when it came to getting advice.

“We had a Whatsapp group and we’d all keep in touch about different things. And then every time one baby was born, the rest of us would ask for advice. So everyone was learning from the ones who gave birth before them.

“I was the last  in Longford to have mine - and then Elise was born in Switzerland - so I had more advice than I could take from the other girls before me.”

And, like their mothers before them, Joanne has no doubt that the six new additions to the family will be close as they grow up together.