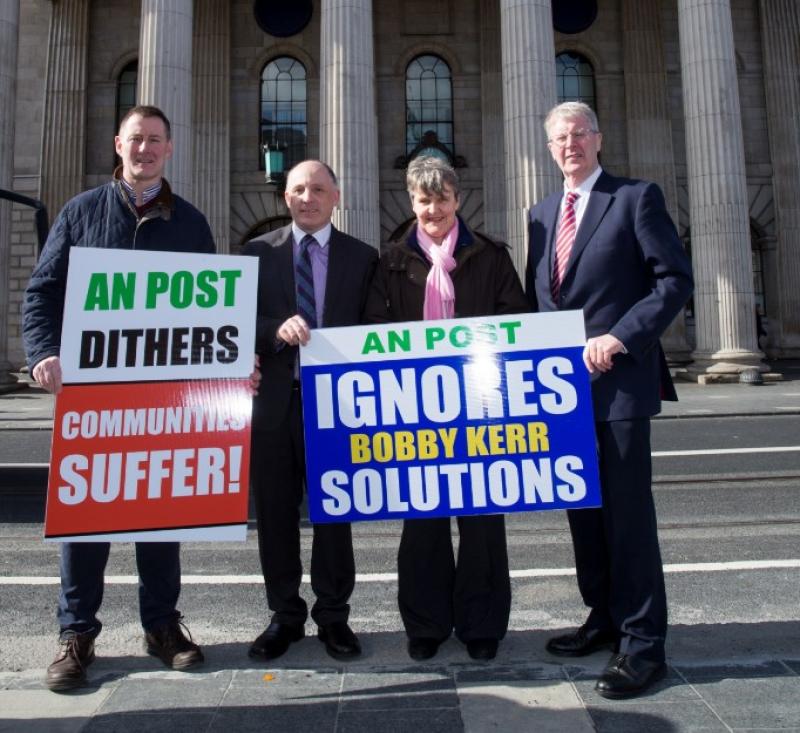 Longford postmasters and their colleagues from across the country protested outside the GPO today saying that they will resist any Post Office closures driven by An Post, and are to mobilise a national campaign to support communities and keep Post Offices open.

The Irish Postmasters’ Union (IPU) called on politicians, communities and social organisations to give their support, while a more comprehensive Dáil rally is planned for April.

IPU Western spokesman, Granard Postmaster Pádraig McNamara said: “Postmasters will not support a ‘solo run’ by An Post. We fully understand that the role and services of the Post Office Network need to change due to increasing use of technology, demographic changes and falling use of traditional mail services.

“The IPU understands that re-organisation and planning for the future is necessary, but we do not support major closures as part of this. We want to provide additional financial, State and social services and ensure that Post Offices continue to serve the economic and social needs of as many communities as possible.

“The Post Office Network is a national asset belonging to the people of Ireland and it must be valued and invested in. Shutting hundreds of Post Offices will only serve to accelerate rural decline and removal of services from communities.

“A social and community perspective needs to be taken into account, and decisions cannot be driven purely by An Post’s commercial mandate.

“Politicians across all political parties, as well as Independents, have always voiced their support and must now intervene and act in the public interest.

“The IPU does not accept An Post’s position of abandoning the vast amount of work done over the last two years and overriding this with its own new commercial plan being developed by McKinsey Consultants. This is ignoring Government, unfair to Postmasters – and not representative of community concerns.

“Amid all of the focus on Post Offices closures in the past week – where are Ministers Naughten, Humphreys and Ring? They must speak up and represent the will of the people and concerns of communities,” Mr McNamara concluded.

Postmasters presented half a million voter signatures to Government calling for greater action in 2015 and an online poll of 7,000 people in 2016 showed that 82% wanted Government to do more to support Post Offices.