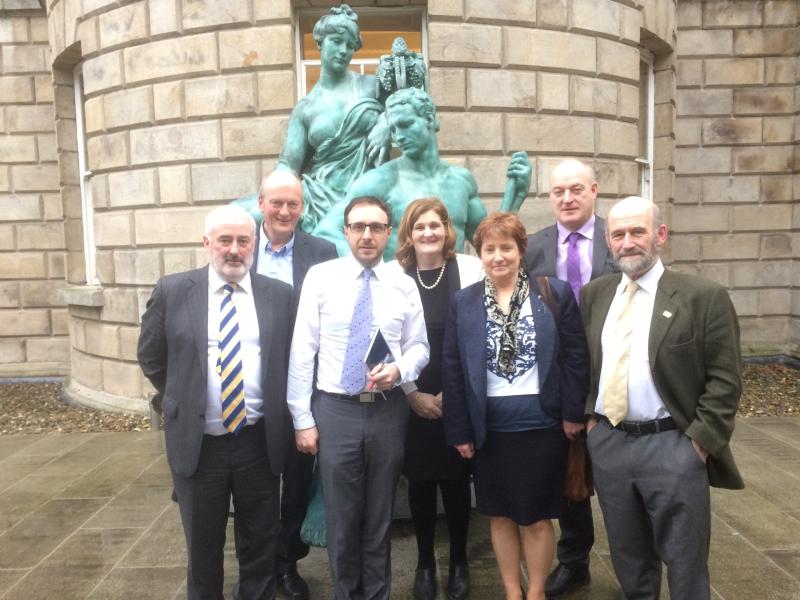 Representatives from a number of different groups met in the Dáil with two Longford/Westmeath TDs -  Labour’s Willie Penrose and Fianna Fáil's Robert Troy, to lobby both parties to oppose the EU-Canadian Trade Deal – CETA when it comes before the Dáil for ratification.

On February 15 the EU Parliament voted to ratify the CETA (EU-Canada Economic and Comprehensive Trade Agreement) agreement, with the four Fine Gael MEPs voting in favour of the deal, and all other Irish MEPs rejecting it. This decision cleared the way for the EU to provisionally apply the deal.

The delegation stressed the urgency of Fianna Fáil and Labour coming out against this treaty as the Fine Gael led government Government has indicated it will ratify the agreement under Art 29.5.2 of the Irish Constitution when it comes before the Dail shortly. It will only require a simple Dáil majority for Ireland to ratify this treaty. The Seanad have no vote on this despite the fact that a motion proposed by Senator Alice Mary Higgins to oppose CETA was carried by a majority in the Seanad last October.

Attracta Uí Bhroin explained how CETA, if ratified will result in a profound transfer of power to foreign multi-nationals via the Investment Court System (ICS). This will allow foreign multi-nationals to sue the Irish government if it passes laws resulting in a loss of their profits. Other countries like Argentina that are tied into similar trade deals have had to pay massive compensation to private water companies when they capped the price of drinking water.

Patrick Kent, President, Irish Cattle and Sheep Farmers Association has campaigned against CETA since it was first mooted. CETA allows for 50,000 tonnes of extra beef from Canada to be imported into the EU. This will have an adverse effect on Irish farmers. A 2015 Teagasc report found that 67% of small farms were not economically viable and CETA will be the final nail in the coffin for these farmers.

Frank Keoghan from ICTU spoke about proposed changes to workers’ rights and employment The Employment Committee of the EU Parliament voted to reject the deal consequent on its concerns about the negative impacts to employment across the EU. His view was shared by Seamus Maye from the ISBA who says that the small and medium business sector which accounts for 67% of total EU employment will not be able to compete with large multinational corporations as a result of new regulations introduced by CETA.

Michael Ewing from the IEN emphasised that the regulatory chill effect of the Investor Court System will be the death knell of effective action to tackle climate change. The fear of being sued will prevent future governments from introducing legislation to curb carbon emissions.

Anna Kavanagh says that if the government ratifies CETA it will be the single biggest loss of our sovereignty since the Act of Union 1800 which brought in direct rule from London.

Deputy Penrose told the group that he is “vehemently opposed” to CETA and will be raising the issue with the Labour Parliamentary Party.

Deputy Troy will also be raising the issue with the Fianna Fáil Parliamentary party. It was put to him that Fianna Fáil has the power to block the ratification of CETA and Anna Kavanagh said that CETA will be an issue in the Longford-Westmeath constituency if elections are held prior to the Dáil vote on it.