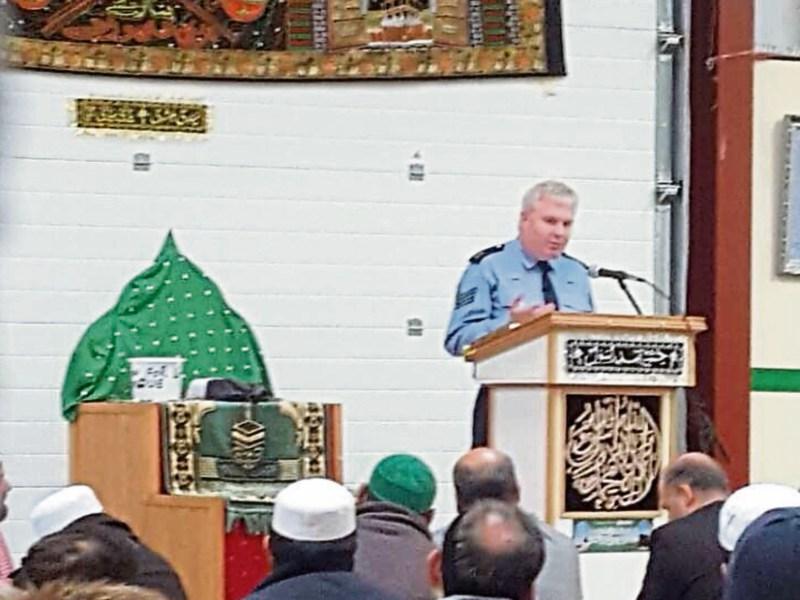 Close to 200 worshippers turned out to hear what members from Longford's Community Policing Division had to say on matters dealing chiefly with  crime safety advice.

Aside from the somewhat uncommon sight of gardai intermingling with members of the Muslim community, there was the rare, but intriguing display of Urdu greetings given by Sgt Lionel Mullally.

He was flanked by fellow community policing gardai, Mick Belton and Ann-Marie Reilly.

All three were welcomed into the Mosque by director and trustee, Dr Syed Ali.

He said the occasion was one which he and the wider Muslim community were especially keen to hold.

“It went very well I must say,” he told the Leader afterwards.

“They spoke of crimes that have been happening, the Muslim religion and the knowledge they had of it  was very impressive.”

The afternoon gathering was in keeping with a nationwide Garda Streetwise  campaign.

It comes hot on the heels of a series of other crime prevention initiatives that have been rolled out by  Supt Jim Delaney and Longford's  community policing unit.

Inspector Padraig Jones revealed the event was similar to other community led projects which gardai had orchestrated since the new year.

“Members from our community policing unit were also at St Mel's Cathedral where they attended two masses and met parishioners,” he said.

“There have been stands put up in Longford Shopping Centre and we have also been maintaining a high visibility around the town with morepatrols in areas where there is a need to prevent crime from taking place.”

Other recently introduced measures include Longford Gardai's involvement with the county's Age Friendly Alliance as well as the launch of the aptly named Crime Ambassador programme.