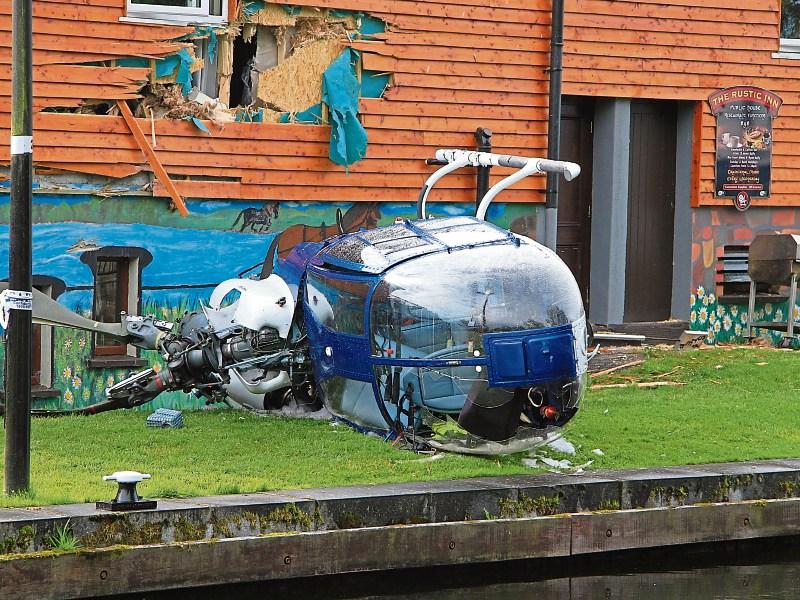 An investigation into the helicopter crash in Abbeyshrule in July 2015 has found the location where the pilot attempted to land was "inappropriate and wholly unsuitable for a helicopter landing."

The accident unfolded when the pilot tried to land on a canal bank beside the Rustic Inn guesthouse.

The report found the main rotor blades made contact with a timber clad wall of the building, causing the  tail to swing rapidly towards the wall and collide with it.

Both the pilot and passenger emerged unscathed with the  incident having been  captured on CCTV.

Debris was scattered over a large area of the canal and its bank.

There was no fire and the pilot and passenger evacuated the helicopter and were uninjured. One person, who was in the building at the time of the event, received minor injuries.

The investigation which was carried out by the Air Accident Investigation Unit Ireland (AAIU), spoke to the pilot and the passenger and also took a statement from the main witness - the owner of the restaurant/guesthouse which was struck by the helicopter during the incident.

He said that when he heard the noise of the helicopter, he “attempted to go out the exit door down at the far corner [of the function room] and was obviously under a bit of pressure trying to open it because of the force of the helicopter outside blowing the wind”.

“Another person appeared behind me and we went back inside; someone else entered the function room at that time,” he added.

“At that point there was a bang and the window blew in.

“I think the three of us ended up on the floor”.

The witness also informed the investigation that he was aware that additional guests were due to arrive, but that “there was nothing to suggest that they would be coming by helicopter”.

Meanwhile, the pilot told the investigation that he and his passenger flew to that location in south Longford with the express purpose of landing there and spending the night.

“I am very familiar with landing in close proximity [to other objects]; I do it on a regular basis,” he added.

“I knew that the landing site was very tight, but it was certainly do-able”.

He mentioned that he performed two approaches and noted that “there was a lot of wires around too and there’s of course the lamp posts”.

With regards to the final moments of the attempted landing, the pilot stated that he was very aware of where the blades were in relation to the wooden wall of the hotel building.

“I was completely aware of it and just in the last couple of seconds, when I was at a skid height of say six inches, I allowed the machine to drift into the side of the wall,” he continued.

“I am just being frank and forthright with this; there was never any question about the machine being defective in any way.

“It was just simply a momentary lapse of my concentration.

“I turned over to look for it and lost concentration.”

The investigation also concluded that ‘probable cause’ of the accident was the loss of clearance between the main rotor blades and an adjacent building during an attempted landing at a confined site.