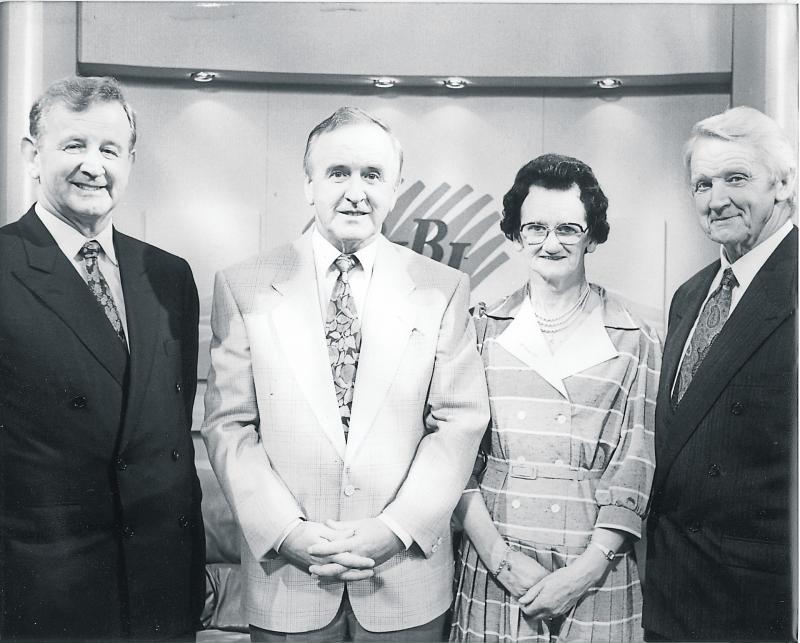 Teresa Reynolds (née Reynolds), who died on Friday, March 3, pictured with her three brothers Jim, Albert and Joe Reynolds (all now deceased) on the set of the BiBi TV show in the 1980's.

There is widespread sadness across counties Longford and Leitrim this weekend following the death of Teresa Reynolds (née Reynolds), sister of the late Taoiseach Albert Reynolds.

Teresa was the last surviving sibling of the renowned and widely respected Reynolds family and she grew up in Rooskey, Co Roscommon alongside her brothers, Albert, Jim and Joe.

Her death, which occurred on Friday, March 3, is all the more poignant in that it comes just four months after her late brother Jim and his wife Anne (née Lenehan from Annaduff) died within twenty-four hours of each other in Longford town on the weekend on November 5 and 6 last.

Brothers Jim and Albert were leading dancehall operators, and at one point, accomplished businessman Jim operated the Longford Arms Hotel, the Annaly Hotel and also The Fountain Blue in Longford town.

A Fianna Fáil stalwart, Albert led the party in two coalition governments, and for him, his most important political contribution was his work on the peace process.

The late Teresa Reynolds,Tooman, Mohill died peacefully at home on Friday surrounded by her loving family.

Teresa Reynolds reposed at her home on Saturday, March 4 from 6pm until 9pm and on Sunday, March 5 from 4pm until 7pm. House is private at all other times.

End of an era as well known Longford town business couple, Jim and Anne Reynolds, pass to their eternal reward