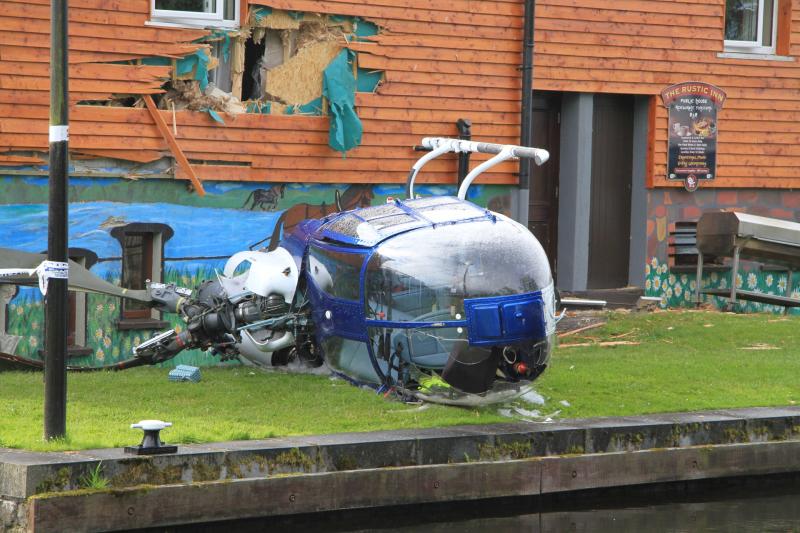 The helicopter crash scene in Abbeyshrule in 2015. Photo by Michelle Ghee

The pilot of a helicopter that crashed in Abbeyshrule, Co Longford has told air accident investigators that he suffered a ‘momentary lapse’ of concentration.

The incident occurred on July 15, 2015 at the Rustic Inn on the banks of the Royal Canal and regarding the final moments of the attempted landing, the pilot stated,

“I was very aware of where my blades were in relation to the wooden wall of the hotel building. I was completely aware of it and just in the last couple of seconds, when I was at a skid height of say six inches, I allowed  […]  the machine to drift into the side of the wall. I am just being frank and forthright with this. There was never any question about the machine being defective in any way. It was just simply a momentary lapse of my concentration […]”.

He said that he was “concentrating on a bollard, which I knew was there for tying down the boats on the side of the canal and I was concentrating  [on] where that was to the skid” and that he “turned over to look for it and lost concentration”.

The report of the Air Accident Investigation Unit also found that the chosen landing location was “inappropriate and wholly unsuitable for a helicopter landing. It contained a number of obstacles and potential aerodynamic hazards.”

Prior permission to land on the canal bank was not sought from either Waterways Ireland or from the owner of the restaurant/guesthouse.

While attempting to land, the main rotor blades of the helicopter made contact with  a timber-clad wall of the building.

This caused the tail of the helicopter to  swing  rapidly towards the wall  and  collide with  it. The tail boom separated  from the helicopter, broke apart, and came to rest in the canal.

The helicopter rolled to the right and impacted with the canal bank. Debris was scattered over a large area of the canal and  its bank. There was no fire.

The pilot and passenger evacuated the helicopter and were uninjured.

One person, who was in the building at the time of the event, received minor injuries.

Abbeyshrule helicopter crash: “The smell of fuel was so strong you could taste it”