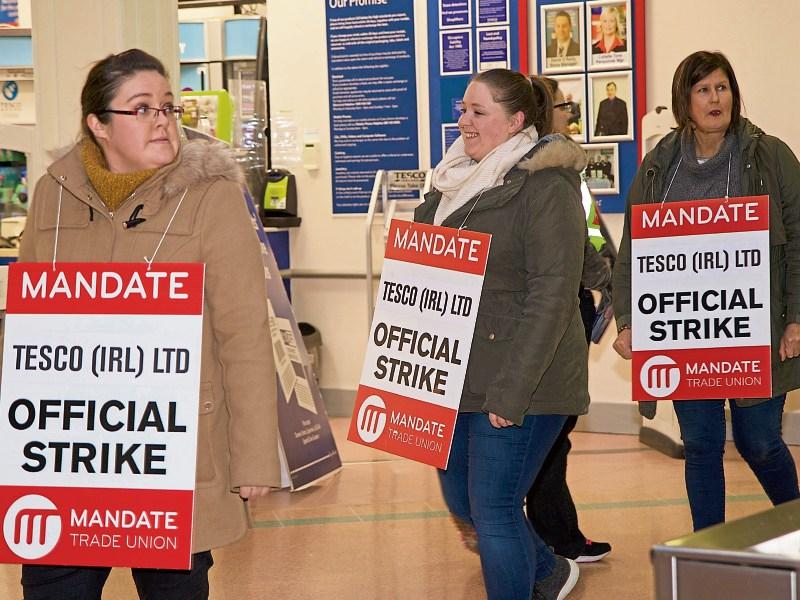 Longford consumers have come in for noteworthy praise this week following confirmation strike action at Tesco has been suspended pending fresh talks at the Labour Court.

In a statement released last Friday, the grocery giant said it was going back to the negotiating table with a view to ending the current impasse between it and around 250 long serving staff.

“Tesco confirms that it is engaging in discussions instigated by the Labour Court to resolve the current dispute related to pre 1996 terms and conditions.

“Mandate will immediately suspend all industrial action and Tesco has confirmed that it will not make any changes to pre-1996 terms and conditions whilst this process is ongoing.”

Those assurances have been warmly received by over 70 staff from the retailer’s Longford store who until last Friday were preparing to enter their third week of strike action.

Another surrounds confirmation that unlike previous exchanges between Tesco and Mandate Trade Union officials, the fresh talks will include input from both the Irish Congress of Trade Union and IBEC.

A spokesperson said staff were quietly content to have returned to work this week and were remaining “upbeat” of a positive outcome as talks continue.

That same sense of positivity was directed at Longford’s shopping public and local politicians, many of whom opted against crossing the picket line as industrial action got underway.

“The solidarity that has been shown to us has just been fantastic,” said one employee, pointing to an example of how one supporter splashed out on almost a dozen bag of chips for striking workers.

“That was absolutely fantastic,” he added. “At the end of the day no one wants to have to go out (on strike) but we know that if we have to do so again we will have the support of people in Longford to do that.”