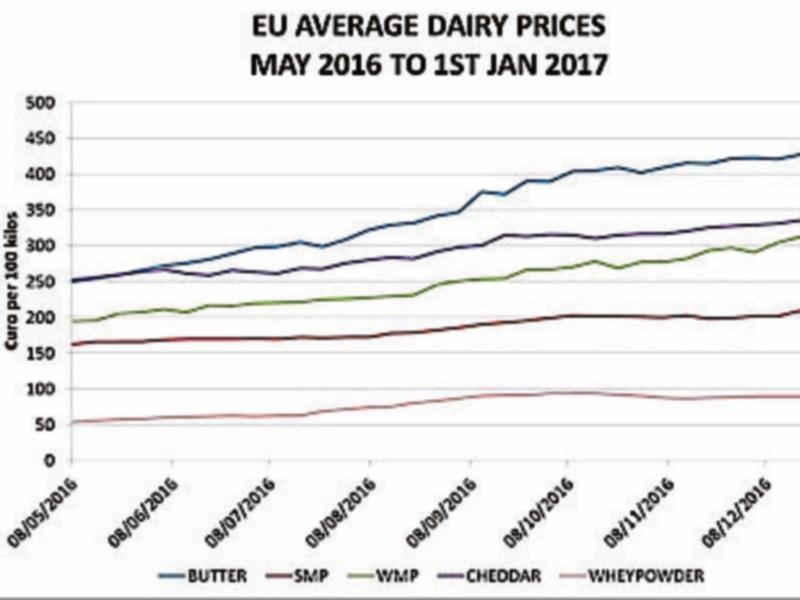 Based on the likely Ornua Index, GDT returns and the milk prices quoted from European milk processors, ICMSA Dairy Committee Chairperson,  Gerald Quain, said that his organisation is anticipating a milk price rise as coop boards meet to set price for January supplies.

Mr Quain noted that Friesland Campina, the giant Dutch Dairy cooperative, had increased its milk price for February to 33cpl.

“This is an increase of €0.50 per 100kgs on last month and provides a clear indication of the level of confidence at processor level in mainland Europe,” he added.

“This must now be reflected in the price being paid to Irish milk suppliers by their coops,  which are paying well below that price level.

“In addition to the stronger Ornua Index, we would also be looking at the Global Dairy Trade Auction which rose by 1.3%, a  consecutive increase that leaves us with nine positive results from the twelve auctions that took place over the last six months.”

He added; “There were notable gains for a number of particular products within the latest GDT auction with butter increasing by 4.9%, WMP increasing by 1% and SMP by 0.1%”.

Meanwhile, ICSA says it is looking at a rise of one cent per litre giving an average of 31 C/L for January milk”.

“We know that coops realise that cash-flow is a major issue on dairy farms at this time of year and coming after the milk price depression in 2016, every cent counts,” continued Mr Quain.

“We think and trust that against the background of continuing gains and strengthening of dairy markets that coops will deliver the price rise that the facts support.”