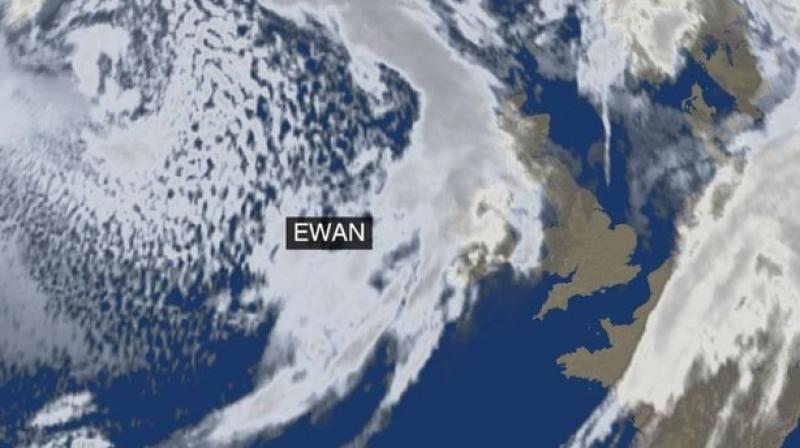 If you are heading to Glennon Brothers Pearse Park today for the Allianz NFL Division 3 encounter between Denis Connerton’s Longford and Kieran McGeeney’s Armagh, well then you better wrap up well and bring the umbrella.

Longford and several midlands counties are subject to wind warnings as the second storm in a week sweeps across Ireland.

Met Éireann has put in place Status Orange and Yellow wind warning for several counties to warn people about the impact of Storm Ewan. The storm will ease during Sunday but it will be followed by a cold snap expected to last until mid-week.

Hot on the heels of Storm Doris the forecaster has put people on alert of another winter storm.

South to southwesterly winds will reach mean speeds of 50 to 65km/h with gusts of 90 to 110km/h at times from Sunday morning to Sunday afternoon. The warning is in force until 3pm.

A higher Status Orange warning is in force for Wexford, Cork, Kerry and Waterford. Gust may hit 120km/h along southern and southeastern coastal counties from early Sunday until afternoon.

The national forecaster is also warning of heavy or thundery rain also, especially in the midlands, Connacht and Ulster. The rain will clear later this afternoon with showers following. Highest temperatures of 7 to 11 degrees.

It will become cold on Sunday night with clear spells and scattered showers, some wintry with a risk of thunder in the west and possibly a few flurries of snow on high ground. Frost and icy stretches too. Lowest temperatures of -1 to +1 degrees with moderate southwest breezes.

Monday will be very cold with wintry showers of rain, hail and sleet with a risk of thunder, especially in the west. Showers will be heaviest and most frequent over the western half of the country. Highest temperatures of just 4 to 7 degrees with moderate to fresh southwest winds.

Monday night will be bitterly cold with a widespread sharp to severe frost and some icy stretches. Whilst many areas will see a lot of dry weather under clear skies, some wintry showers about too, most of these occurring closer to the Atlantic. Snowfall will mainly be confined to higher elevations however. Lowest temperatures 0 to minus 3 degrees in light to moderate southerly breezes.

Tuesday is forecast to be a cold windy day, in a brisk northwest breeze. Once again scattered wintry showers will move down across the country. This time most of the wintry showers will occur across the midlands, north and east to begin. Snowfall will be mainly confined once again to higher elevations, but a light dusting is possible locally. Showers mainly of rain as of late morning, with more in the way of sunny spells developing as it becomes mostly dry. Highest temperatures 6 to 9 degrees Celsius, but with an added wind chill.

Wednesday is expected to be dry in parts to begin with some hazy sunshine and frost clearing. However a spell of wet and breezy weather will gradually feed up from the southwest, turning wintry for a time locally. Becoming drier again around evening. Highest temperatures of only 5 to 9 degrees Celsius, in fresh and gusty westerly winds.

Thursday is forecast to be a little less cold with highest temperatures of 6 to 9 degrees. It will be mostly dry with sunny spells. A few well scattered showers occurring too though, in a moderate westerly breeze.