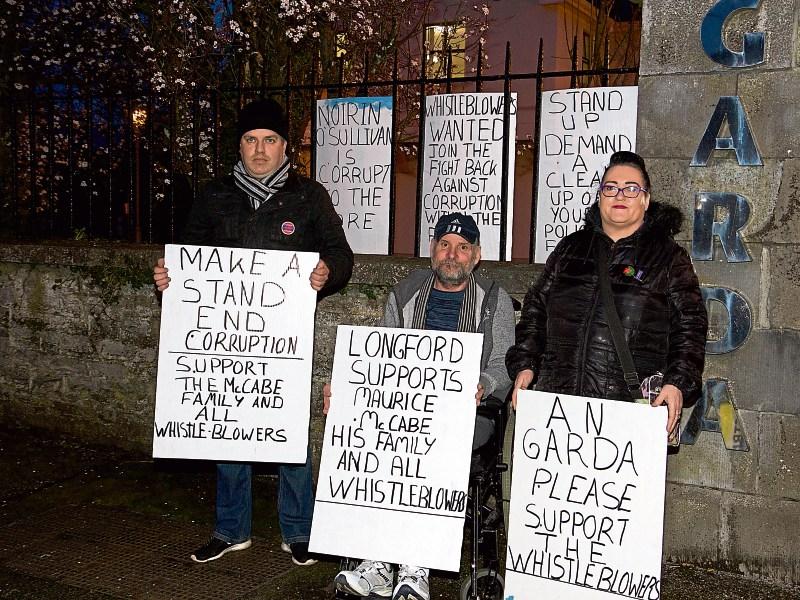 Six people turned up at Longford Garda Station last Saturday evening as part of a nationwide vigil to support Sergeant Maurice McCabe and his family.

McCabe has now become one of the biggest whistleblowers in the history of An Garda Síochána and has faced a smear campaign for years by senior Garda management.

Vigils were held at various garda stations across the country in a show of public support and solidarity with Maurice McCabe and other members of An Garda Síochána who may  need protection for speaking out against wrongdoings.

Locally, John Stokes and Tena Keown of the ‘Longford Says No’ campaign organised the vigil in the county town in conjunction with grassroots movement, Uplift, which has sprung into action in the aftermath of the revelations surrounding Maurice McCabe and management in the Irish police force.

“A very small crowd showed up,” added Mr Stokes who then pointed to the importance of highlighting the wrongdoing within An Garda Síochána and the necessity of supporting McCabe and his family at this time.

“Uplift members have been calling for the Garda Commissioner to stand aside as the smear campaign against Maurice McCabe is investigated.

“We deserve a police force we can trust - and we deserve answers and accountability - sooner rather than later.”

Meanwhile, other vigils are in the pipeline as the fallout from the controversy rumbles on with Taoiseach Enda Kenny sent to step down in the coming weeks following outrage in the Dail  over his handling of matters.

“It is very necessary to show support to Maurice McCabe and his family over the way he was treated by the Gardaí,” Mr Stokes added.

“People who highlight wrongdoing in our State agencies need to be protected.”

Government last week agreed to establish a Commission of Investigation on foot of a recommendation by a judge in a report prepared for the Minister for Justice in 2016. The report contained information about the protected disclosures made by garda whistleblowers.

The inquiry is to investigate claims of a campaign by senior gardaí to discredit Sgt McCabe.