Tesco row ratchets up as staff down tools 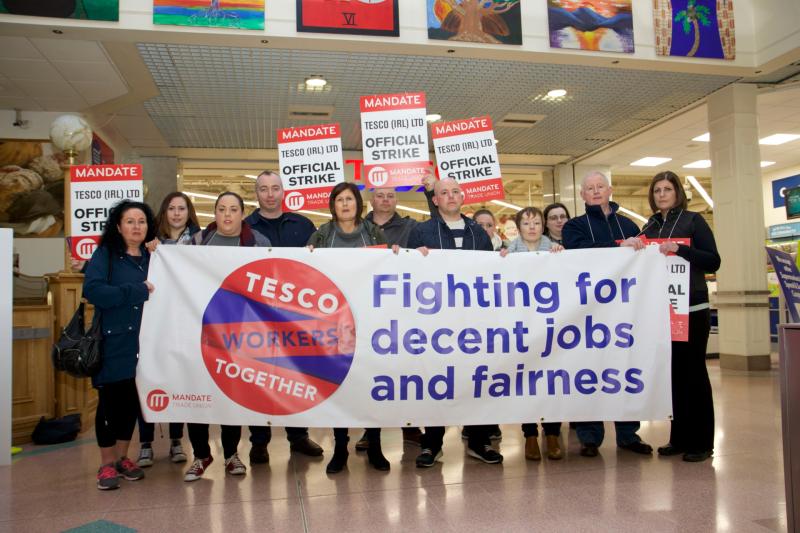 Tesco workers involved in a pay dispute over contracts for long-serving staff have vowed to stand united in their efforts to protect the terms and conditions of disaffected employees.

It comes after workers at the company’s Longford store joined seven other outlets nationwide in an indefinite strike over attempts by the company to alter the contracts of pre-1996 workers.

More than 70 staff were scheduled to take to the picket lines yesterday (Tuesday) in support of the 15 long-serving staff currently embroiled in the dispute.

The Leader was present from early morning as workers staged protests at both the front and rear entrances to the Longford store.

However, due to the fragility of the row, some asked for their names not to be published when speaking to the media.

“Staff have felt very stressed and annoyed by the threats of Tesco to change our contracts that we have held since 1996,” said one disgruntled employee.

“We have built our lives around these contracts. Tesco, in 1996 were delighted to have us with them saying at the time that they valued our knowledge of the business and looked forward to working with us into the future. How things have changed.”

Mandy Kane, Regional organiser with trade union Mandate, said despite concerted efforts to bring about a satisfactory resolution, employees felt they were left with little option but to down tools.

“The dispute that’s happening here today is because the company haven’t reversed their decision,” she said.

“We wrote to the company as late as last Friday clearly asking them to make a clear statement to the workers that they wouldn’t be imposing these cuts and changes but unfortunately the company haven’t responded back.”

Ms Kane wouldn’t be drawn on whether Tuesday’s strike could prompt the company to adopt a more draconian approach through the auspices of compulsory redundancies.

Rather, she laid claim to Tesco’s decision to introduce pay increases for workers with the exception of those who joined the company before 1996.

“There is always a danger of a company coming back after a dispute,” she said.

“The Labour Court has also introduced a recommendation that these individuals be given a two per cent increase. The company though chose not to do that.

“They chose to punish the pre-1996 workers and not give them the two per cent and in January of this year they also awarded two per cent to every other worker other than these ones.

“There are individuals that have received a four per cent increase all bar the pre -1996 workers so how fair is that?”

In a statement, Tesco said both its Longford and seven other stores affected by yesterday’s strike would remain open for business as usual.

The firm also said it had been left “shocked” by the move and claims Mandate were also advising customers to shop in non-unionised competitor stores.

“The company has followed all the industrial relations processes of the State to seek agreement,” read a statement.

“Despite the actions of Mandate, the company has not made any changes to the pre-1996 terms and conditions of the 250 workers at the centre of the dispute.

“Tesco continues to call on Mandate to withdraw its plan to damage the company with an unjustified strike and to accept the Labour Court Recommendation.”