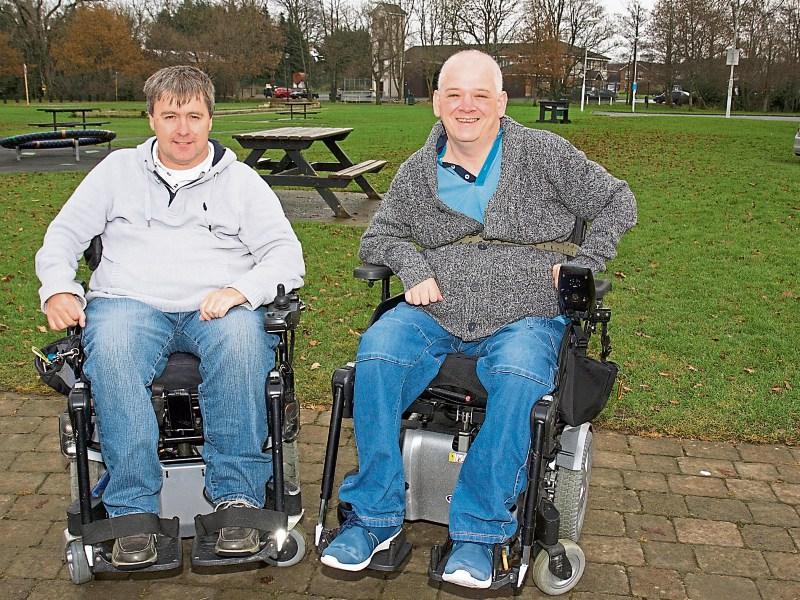 One of Longford's hidden treasures is the Centre for Independent Living (CIL). This is a non profit organisation providing 30 Personal Assistants (PAs) to people who have acquired a physical or sensory disability and who otherwise would have been fully independent prior to their current circumstances.

The nature of the service is to support, enable and facilitate a person with a disability to live as independent a life as possible.  Holistically they  provide a service that facilitates people to have control in how they live their lives, have equal rights and to achieve independence.  In theory this means that people with disabilities can make their own decisions about their life and the service they receive and in practice the service user leads their service.  Accordingly the service users are referred to as  ‘Leaders’   as they are in charge of their own service.

Two strong advocates of this movement within Longford CIL are well known men Joe McCormack from Colehill and Victor Connell from Killoe. Both have overcome and are dealing with life changing accidents and are at pains to highlight and emphasise the importance of the Longford CIL in aiding their onward journey.

Explained Victor: “It is all about the PAs getting to know you.”  It takes Victor as much as two hours to get up, showered and dressed in the mornings with the support of his PAs before the Killoe man has his game face on and is ready to face the world. He is hugely supportive of the PAs’ commitment to him and especially in recent years after a number of  pay cuts.

Today the CIL team in Longford is constantly battling to provide the same exemplary high quality service but with much reduced funding. There is more emphasis on meeting basic care needs within the home rather than enabling the whole person to have a life outside of the home.  One would expect that the PAs might feel pressurised and try to do everything in as short a time as possible. However Joe McCormack is full of praise for the PAs and said: “What people don't realise is how important the PA becomes in our daily lives. The very ethos of the CIL movement is about enabling Joe McCormack to be Joe McCormack.”

Victor Connell agrees with this view saying “a spinal cord injury is a huge adjustment for anyone not only in the physical sense but also emotionally. The public see us out and about in our chairs but they never think of the effort involved in getting us there. We need to be helped out of bed, dressed and be provided with the other basic care needs before we can do anything else ourselves that day.”

For Joe McCormack the PAs have become part of the family. He has seen them build a rapport with not only himself but his entire family and he also greatly values the security that comes with the Longford CIL service. “These guys have the full run of your home but there's a great trust there and that is one worry less for us all, they respect our space and we value that.”

And added Joe: “We can only be as independent as we are able to be. We are very limited in what we can actually do but then Longford CIL bridges that gap between ability and disability and it’s that link that allows and helps us to live as normal a life as possible.”

We spoke to two of the PAs, Tom Farrell and Kevin Garvey and it was clear that they find the role hugely rewarding and fulfilling. They took us through a typical day for them and it is fair to say that no two are the same. Says Tom: “We assist people out of bed, to shower and dress, make breakfast, exercises or we go shopping the usual things everyone does.  “We've become friends with some great people and we have been welcomed into their homes and their families. It is about building a trust and getting to know the person.”

It spoke volumes for both PAs that neither concentrated on how cuts during the recession affected them. They focused on the repercussions for the Leaders as well.  Kevin Garvey says time is a big challenge for the PAs. He said: “Leaders are not getting sufficient hours to meet their needs as a result of the funding cuts so you feel you're all the time racing against the clock and trying to get things done. That's not fair to the Leaders either.”

Valerie Moran manages the Longford CIL service and she has been involved with the project since its inception in 1999. She  is a visionary leader and great campaigner for the service; Valerie herself was fully independent as a young girl but despite her challenges, she ably manages 30 PAs and provides support and a point of contact for 34 Leaders.   She said: “We are still feeling the effects of the downturn unfortunately.  We not only provide assistance to people with disabilities, we are a much needed social outlet for them as well.   However, we have noticed, that people with disabilities in some ways have gone back to where they were nearly 10 years ago.  Due to straitened financial means we cannot provide funding to enable our Leaders to access community resources.”

Initially Longford CIL was  a small organisation employing 12 people through a Community Employment Scheme to work as PAs with 12 Leaders.  Today it is a  small company with charitable status, employing thirty  people.  Says Valerie: “We are an invaluable and integral group within the community contributing to both local people and businesses.”

The PAs are the critical link in the process or as Valerie Moran so brilliantly put it, “they provide the arms and the legs.” At the core of the PA service is enabling the Leaders to do what they otherwise would be unable to do.

Longford CIL has a voluntary board of eight very experienced and professional people which oversees the organisation.  They give their time and expertise freely.  One such member is Elizabeth Moore, PRO for Longford CIL. Elizabeth is hugely passionate about the service and is determined to battle the challenges it faces. Currently the service operates from an office space at the College Medical Centre.

Elizabeth Moore sees great progress made by the service in Longford and is in no doubt that the dedication, commitment and resolve of the service manager, Valerie Moran, has been a critical component in this successful journey. Clearly funding is an ongoing challenge for the service and one senses that it might well be inhibiting the evolution of the service to the next level.

Elizabeth added: “There are many instances where the Leaders could gain more independence but on account of lack of funding to provide PA support, we simply cannot accommodate them.”  Another service user is Rosie Spollen and her  words speak volumes: “ I rely on the PAs to get me sorted for the day.  I don’t know what I would do without them.  I would be housebound.  They are my link to the outside world.”

“The PA service helps me so I can live independently in my home.”

It is heartening to hear both PAs and Leaders experiences are that of connection and commitment – giving a real sense of security within what sometimes can be an uncertain path to travel when you have a disability.

As Anne Rooney put it:   “I have worked with Longford CIL as a PA for the past eight  years.  During that time I have found the work to be both rewarding and challenging.  You enter people’s home as a stranger and leave as a friend.

“Looking towards the future, it is certain that the service will have to expand to respond to a growing need.   At that point we may need, for example, a bigger building to base ourselves in, or, if the need arises, access to some form of transport.”   Valerie  Moran would like people to understand and value the uniqueness of this organisation.    It was set up for and by people with disabilities.  It is run by a person with a disability.  It was set up by Longford people for Longford people.  It is a growing service, vital to the people within this community.