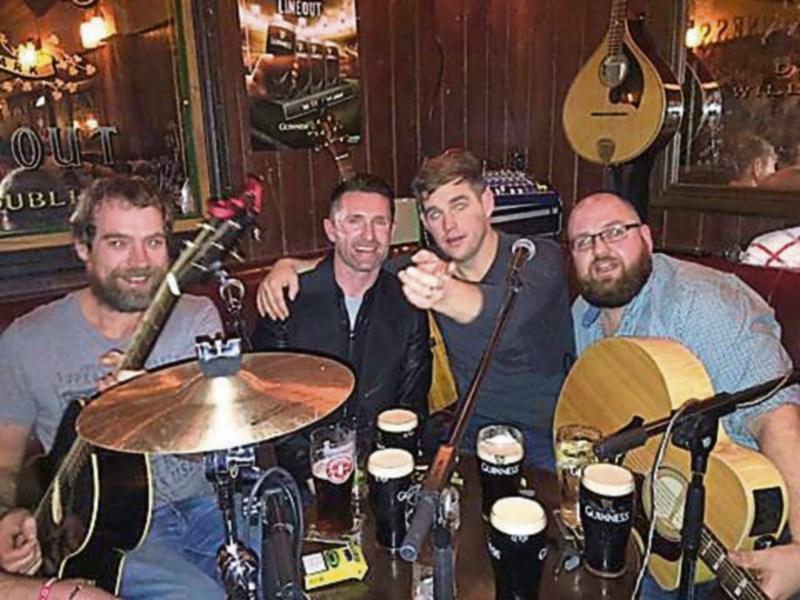 All eyes in Lanesboro were glued to the TV screen on Saturday night as local boy Fran Deffew put on a rousing show with  his band, Rake the Ashes.

The group are getting rave reviews on the trad and ballad scene but the TV breakthrough came after soccer star, Robbie Keane, belted out a few tunes with them in Cassidy’s Bar in Dublin recently.

The performance went viral on the internet and as so often happens these days, the TV and major media interest soon followed. The live performance is a major breakthrough for the band who have just produced their first album.

There was little time to celebrate the TV debut either as they went straight into a hectic schedule of video shoots on Sunday morning ahead of forthcoming UK and German tours.

Fran Deffew grew up in Lanesboro after moving there from Mountmellick with his parents, the late Noel and Bridie,  in the late eighties.  Sadly both parents have since passed away but the musical gene came courtesy of his larger than life father, who was a well known and popular figure on the old trad and live music scene. Noel passed away  in 1995 and then Fran and his three siblings said a heartbreaking good-bye to their beloved mother, Bridie, in 2010.

Today  Fran’s sister, Ailish, still lives in the Shannonside town with husband, Ivan Ruske, whilst their older brother, Nev, lives in Moycullen, and sister, Sorcha, is teaching in the Middle East.

Whilst the impromptu gig with soccer legend, Robbie  Keane,  catapulted the band into the limelight,  it wasn’t the first time that the Lanesboro man belted out the tunes with some well known names.

Cassidy’s bar is owned by former Dublin GAA great Fran Ryder and Jamsie O’Donnell, who is a brother of the singer, Daniel. It’s a popular spot on the Dublin social scene and especially with sports stars and entertainers.

Said Fran: “In the past we’ve done tunes with golfer Shane Lowry  and that was a  cracking night. We also had Laurence Kinlan, the actor from Love Hate perform with us.”  They’ve also lashed out the tunes with soccer star, Niall Quinn whilst many in Longford will already be familiar with the singing prowess of Stephen Kenny, the current Dundalk and former Longford Town boss.

By day Fran Deffew is a scientist and probably secured the dream job when he joined the lab team at Guinness in St James’ Gate, Dublin. He still has many friends  back in Lanesboro and throughout Co Longford.

He told the Leader: “The reaction has been brilliant and there have been so many messages from people down there. I know we had to get more copies of the album down to Joe O’Brien’s shop in the old town because he was selling more CDs than the Longford Leader!”

Fran told us that local hairdresser, Mags Gillen, who has been a great friend and supporter of the Deffew family down through the years also has the CD for sale in her salon.

The next big date for the group is the launch of the album back in the big smoke this weekend and Fran is looking forward to a welcome visit from Noel Carberry, the famed uileann piper from Derrahaun, on the outskirts of Lanesboro. He was great friends with  Fran’s late father and was delighted to feature on the new album.