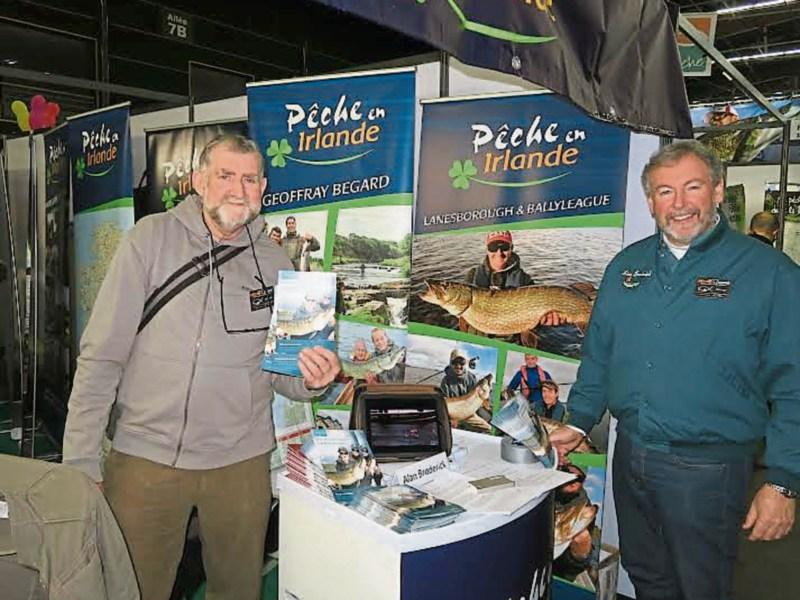 Ballyleague anglers have distributed over 2,000 brochures in France and as a result one of the country’s most experienced angling journalists, Pascal Le Herissier will be on his way, shortly,  to test the pike and predator fare on Lough Ree.

The editor of the popular Brochet/Zander Fishing Magazine confirmed his plans to travel to the banks of the Shannon on the Longford-Roscommon border next June, when he met with representatives of the Lough Ree Angling hub at the biggest angling trade show in France last weekend in the city of Clermont-Lerrand.

Paul Burke and Alan Broderick, two vastly experienced anglers were in France for three days to distribute over two thousand brochures about Lough Ree and Lanesboro-Ballyleague. The brochures contained all the details of the fishery and had been translated into the French language for the locals.

Inland Fisheries Ireland and angling trade partners have been exhibiting at this show for the last 10 years and invited Lough Ree Angling Hub to take part this year after the success of the World Predator Boat Championships in the Shannonside town last October.

“The show focuses on all aspects of angling with pike and trout angling proving most popular.”

Mr Keane went on to say that the Carrefour National Pêche et Loisirs show was an ideal platform on which to promote the Irish angling product to French anglers in the central region of France.

“It also provides great marketing and networking opportunities for trade partners to develop new business, meet existing customers and meet press and other important influencers in the French market,” he added.

“We were delighted to have Alan and Paul there and wish to thank Longford and Roscommon County Councils and Inland Fisheries Ireland for getting us there.”

The Lough Ree Angling Hub hope to send another team of promoters to Holland, UK and Germany later this year to promote Lough Ree and Lanesboro-Ballyleague.

The hub will also be announcing details of a new predator competition in the coming weeks with a prize fund of €10,000 up for grabs.