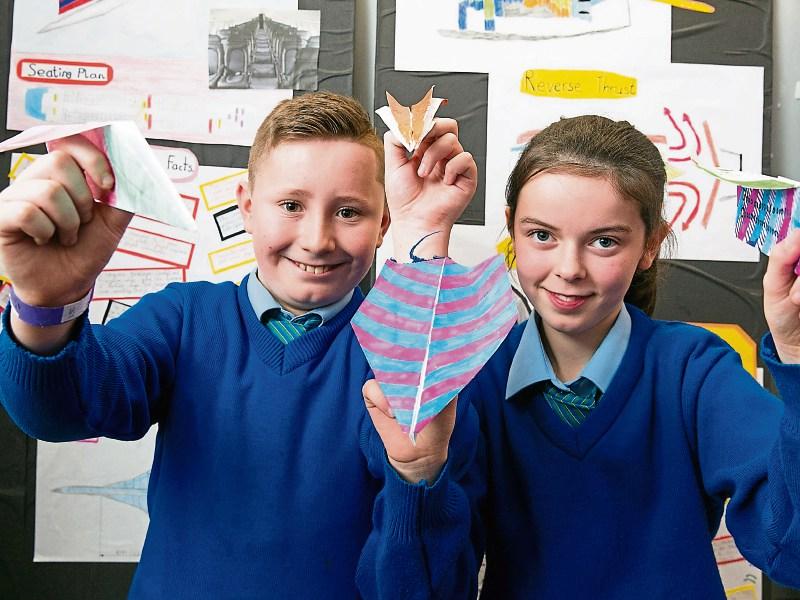 Longford’s young scientists were to the fore last week, as the BT Young Scientist and Technology Exhibition and the RDS Primary Science Fair got underway.

It proved to be a successful week for Lanesboro Community College, with two of their four projects securing awards at the prestigious BT exhibition, which took place from January 11 - 14 in the RDS, Dublin.

Second place senior individual in the Social and Behavioural Sciences category went to Brian Lyons for his project ‘‘We remember 95% of what we teach’: Peer tutoring in TY’.

Entering the competition for the fourth time, Brian was delighted with the accolade, and he gave the Leader a brief explanation of his project and findings.

“Well first, I had to get a method of peer tutoring,” he explained, revealing that he came across one known as the 'jigsaw' method.

“The students were split into groups and there were three students in each group,” Brian pointed out. “The group worked on a topic, let's say microbiology, and each student had a section of this topic.

“Each student then prepared their section individually.”

Once each student had separately prepared their sections, they brought their knowledge back to their peers and learned from each other.

Though he had an idea that peer-tutoring would prove more successful than lone learning, Brian ran four separate Biology tests, two of which were prepared for using peer tutoring, to prove the point. For the other two, students were left to study by themselves.

Unsurprisingly, in the instances where they had used this 'jigsaw' method, the students performed better and felt more confident.

“I also found that the students were very supportive of the peer tutoring method,” the TY student continued. “Many said they would try to use it for their own revision in the future.”

Meanwhile, Sean Maguire and Patrick Kenny were Highly Commended for  work on their project; 'Medical Cannabis: Is there a middle ground?'

With their project, the two young scientists sought to investigate the attitudes regarding the benefits of THC (Tetrahydrocannabinol) and CBD (cannabidiol) contained within medical cannabis.

“Our project is a statistical analysis of the Irish public's perspective on the use of CBD oil as a treatment for epilepsy and Multiple Sclerosis,” they explained. “Our objective was to find out who had a better understanding about CBD oil as medication, those associated with or affected by epilepsy and MS or the general public.”

Two further projects from Lanesboro were also well presented at the exhibition; ‘Understanding how the weather affects fishing', by Adam Kingi, asked whether or not it is possible to accurately predict the optimum fishing conditions based on weather front data.

Speaking about the students’ success, Deputy Principal  Michael Lyons, who worked alongside the students and fellow teacher Ms Mary O'Brien to prepare for the exhibition, expressed his pride at the four “really, super projects” that were presented by the students.

Revealing that there had been a lot of interest in and, in some cases, gratitude for the topics investigated, Mr Lyons added; “There’s great heart in the students.

“An awful lot of the projects presented were about making the world a better place, and it would make you very proud.”

Mr Lyons also paid tribute to Ballymahon Vocational School, for their fascinating, social and helpful project, which won a display award at the exhibition.

‘Defib Demo - The Heart of the Matter’ was a very topical piece, co-ordinated by students Emma Kearney, Sarah McCormack and Ciara Moughty, with the help of their teacher Ms Sinead Mulcahy.

Originally, the main aim for the project was to develop and design an educational programme for GAA players, parents and coaches on how to use a defibrillator correctly and efficiently.

The girls then added CPR to their project, hosting their inaugural CPR and Defib day.

Following the event’s success, the students then set about designing CPR and Defib packs that can be distributed to other schools.

St Sinneach’s NS, Abbeyshrule were very well received for their project ‘How do machines fly?’ while the fourth, fifth and sixth class pupils of Lanesboro Primary School chose a project a bit closer to home.

‘How can renewable energy affect the world?’ saw the pupils delve into the topic with great enthusiasm, with the help of their Principal, Ms Claire Murphy, Deputy Principal, Ms Cora Nevin, teachers Mr Corr and Ms Behan and  parents and supporters. This gave the budding scientists a chance to see renewable energy in action, particularly in the case of windmills and windfarms, which have been the topic of much discussion in south Longford with the proposal of Derryadd windfarm.

“It was very much a team effort,” explained Ms Nevin.

“Mr Corr ably assisted with the making of a solar-powered oven and windmills. One of the parents also helped us make a hydroelectric power model.”

Adding that the pupils had greatly enjoyed the project, and were continuing to learn about renewable energy even after the event, Ms Nevin added; “The fair is one of the best things the children can go to and it’s a great way to enhance the STEM subjects.”