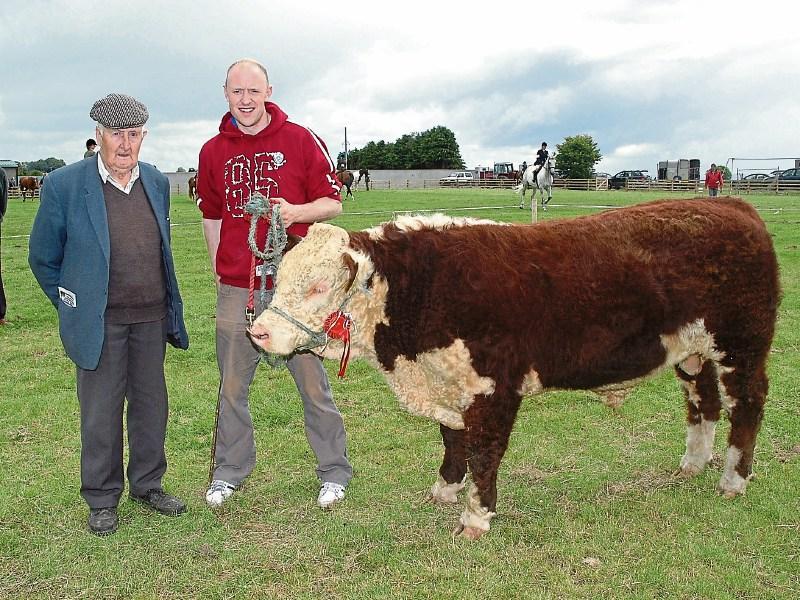 Although he had reached the advanced age of 94 years, the death of William Jones of Kenagh village and Creagh created an air of sadness and loss when we heard of his passing on Christmas Eve at Mullingar Hospital.

Despite his age, Willie was hale and hearty and out and about, until he was hospitalised over the previous week. He had been driving his car until recently, when he paid his daily visit to the family farm at Creagh. In fact, he had been at a Community Party just two months ago.

Willie was a local man, well known to everyone, especially those in the farming community. He was a notably hard worker all his long life.

A great family man and devoted husband to his late wife, Florence (Florrie), he was regarded as a leading authority on the finer points of breeding Hereford cattle.

He was an active member of the Hereford Cattle Breeding Society of Ireland and had been known to hit the national headlines with his prize winning livestock at shows all over Ireland.

In recent years, he featured in the Farmer's Journal and Farming Independent as well as local papers for his achievements in producing some of the best livestock in Ireland.

Over the past twenty years, Willie could be observed at shows as far away as Limerick, Kilkenny, Cavan, Carrick-on-Shannon and many others, always showing off the best in the Hereford classes.

Alongside his cattle breeding interests, he was a very shrewd and hard-working farmer.

During his early years, he travelled the greater parts of South Longford with his Ferguson twenty tractor and thresher, threshing corn for local farmers, long before combine harvesters came around. He was also a great family man and a good mixer in local society.

Very much involved in local affairs, especially of a farming nature, he was the sitting President of the local branch of Fine Gael, where he was a lifelong member.

He will be sadly missed by his many friends and associates all over Ireland and at a local level but, more especially, by his immediate family and friends locally.

We offer sympathy to his sons William, Ivan and Edwin, his grandchildren, daughters-in-law who looked after him so well since his wife died, especially Emily and Pearl, close relatives and extended family and his many friends and neighbours.

No doubt he was a great neighbour, always willing to help those where and when needed. He was buried in the family plot after service in St George's Church, Kenagh on Tuesday, December 27.

We will all miss him as he drove from his house to the family farm without fail everyday to attend his beloved Herefords.