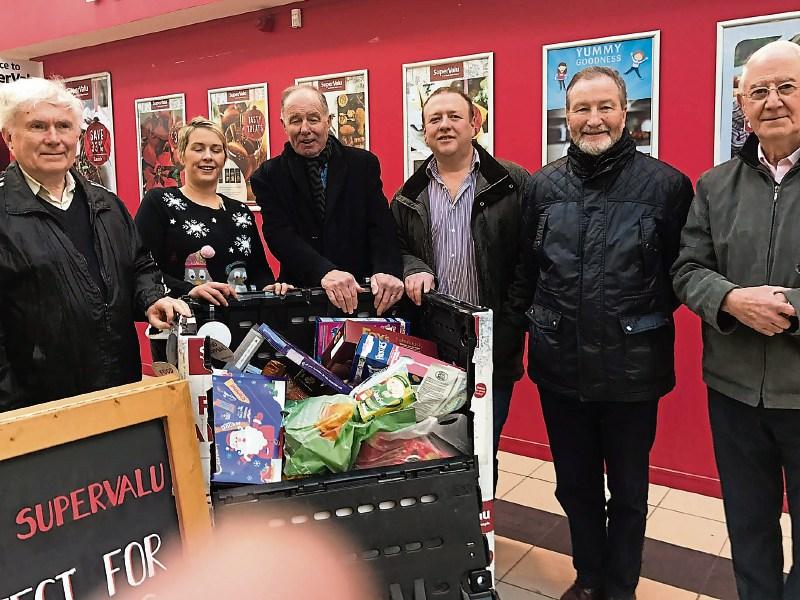 It was a busy Christmas for Longford Lions Club and the St Mel’s Conference of Saint Vincent de Paul (SVP).

The annual food appeal run by both organisations has proved very successful in recent years, but this year the spirit of Christmas was well and truly alive as the local groups reported an increase in cash donations and food supplies.

According to Niall Gannon, Chairperson Longford Lions Club, demands for food increased this year and donations from their food appeal went to the local SVP.

In early December the Lions Club ran a massive hamper draw in aid of the hospice and Mr Gannon told the Leader this week that organisers were overwhelmed by the support received.

“That was a huge success and we raised a lot of money,” he added.

“The huge support out there is testament to the generosity of Longford people and as the demands for food increase with each passing year, so to does the kindness.”

“We’re hoping to do a ‘Message in a Bottle’,” Mr Gannon explained before pointing out that it was aimed at older people who would be encouraged to put their medical history and medication in the bottle and leave it in the fridge.

“This would mean that the information is easily accessible in case of emergencies and we hope to do that in conjunction with Longford Health Services.”

Meanwhile, the local SVP volunteers were busy delivery food hampers to needy people across the town right up to Christmas week.

President of the St Mel's Conference SVP, Kathleen Mimnagh said that demands on services and supports at the organisation had increased on last year.

She said there was more demand for food, and added that, thanks to the generosity of local clubs and citizens, the Society was in a position to deliver food hampers to all those who requested one.

“There was a bigger demand for food this year,” said Ms Mimnagh before pointing out that the organisation also dealt with queries from older people who were looking for fuel.

“Even though the winter is mild this Christmas, there are some people who are cold.”

Ms Mimnagh went on to say that SVP had several delivery vehicles on the road dropping off  the food hampers and she also paid tribute to Abbott who delivered 400 shoe boxes to the organisation’s HQ close to St Mel’s Cathedral a week before Christmas.

“The shoe boxes from Abbott were absolutely beautiful,” she continued. “We got 400 boxes and there were so many happy little children in Longford when they received those on Christmas morning.

“They were the most beautifully made  up boxes you have ever seen and we are so very grateful to Abbott for them.”

And as always, Ms Mimnagh also took the opportunity to acknowledge the kind and generous donations from Longford people this year.

“I know I say it every year,” she smiled, “but the reality is that we would not be able to do what we do, if it were not for all the generous donations and great support that we receive from the people of Longford.

“Honestly, people's kindness and generosity at this time of the year, every year,  is unbelievable.

“I want to thank everyone who has donated, supported and helped SVP in any way in 2016.

“The generosity never ceases to humble me and it is thanks to you that we are able to continue helping those living amoung us who are in need.”