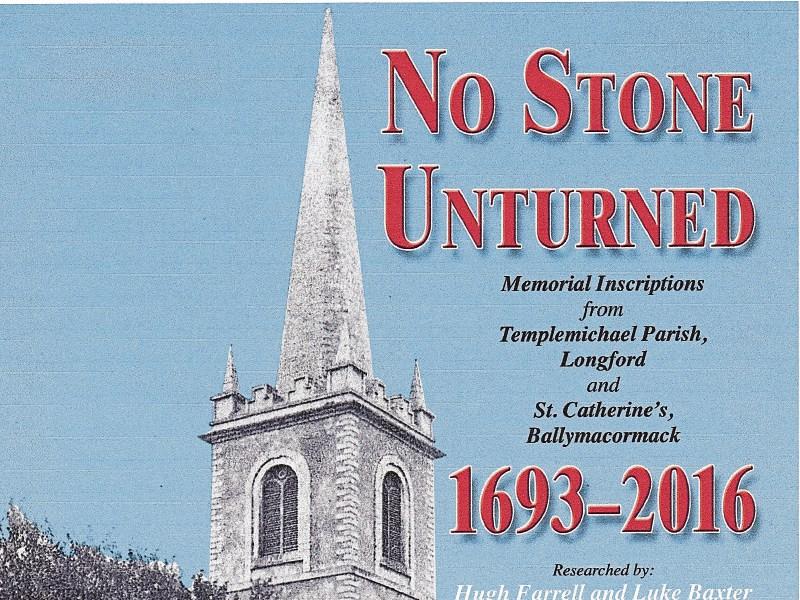 The title of this important publication is very appropriate indeed as this is a comprehensive and painstaking survey of Longford town’s graveyards, including St John’s C of I (where for many years Catholic families also buried) and Presbyterian Church graveyards on Battery Road; Ballymacormack Church of Ireland churchyard and Templemichael graveyard; St Mel’s Cathedral grounds and crypt, together with the convent cemetery and memorials to members of staff of St Mel’s College who are buried elsewhere.

This important investigative work was carried out over four years by well-known local pharmacist and historian Luke Baxter, and by the current chairman of County Longford Historical Society and ONE member, Hugh Farrell. Their scholarship and attention to detail are immediately evident.

The launch of this highly anticipated work took place on Thursday, December 8 in the Longford town branch library.

An overflowing crowd gave an enthusiastic reception to Most Reverend Dr Michael Jackson, Archbishop of Dublin and Glendalough, who performed the launch with obvious warmth and admiration for the content and the elegant form of the book.

He said he was especially glad to have been given the honour of introducing it to the people of Longford as both his parents had chosen Longford as their final resting place. The archbishop’s father, Archdeacon Robert S Jackson, had been Rector of Templemichael from 1991 to 1997.

Accompanying a photograph of each headstone or tomb is a technical description of the stone, the actual wording or inscription and details of the person’s background, family history or profession/trade. This research is valuable to readers today, especially local historians and of course families. We are told that in many cases it was verging on the impossible to decipher some inscriptions.

However, the two authors learned from experimentation that at certain times of the day, e.g. sunset or early sunrise, the lettering could be seen clearly, and that flat stones were more easily read when frost was present or when they were rubbed. Of all the stones they dealt with, in only one case were they unsuccessful.

All are equal in death, but in life all those who are featured here made some contribution to the social or commercial life of Longford.

Dr Nathaniel Mayne of the old Infirmary, Battery Road rests in Ballymacormack graveyard, though his name and the names of some of his family do not appear on his headstone.

A William Nixon was a boot/shoemaker on Main Street while Henry Needham was a painter, glazier and tallow chandler. Thomas Wilson was a coachbuilder and auctioneer in Dublin Street/Keon’s Terrace.

John Noud was a milliner/draper at 16 Main Street, Noud’s Yard adjoining the premises. In the Presbyterian Churchyard, which contains nineteen graves, lies Donald Cameron of a Scottish family who established Cameron Bros shop on Main Street, a famous establishment which closed in 1987 after one hundred years’ trading.

At the start of the section dealing with St John’s, there is a list of all the rectors who served there, a list of eighteen plaques inside the church and a colour-coded map of the entire graveyard, with a list of all interred there. It is therefore much easier to find a particular grave in what might at first seem a maze.

There is also a note on an interesting find, part of a grinding quern, which might indicate a connection with the Dominican Friary located at that site.

The convent cemetery comes in for special mention for its impressive layout and for the fact that Bishop George Conroy is buried there, together with over one hundred sisters. There have been no burials there since 1993 when the order opened a burial plot in Ballymacormack.

St Mel’s College has a total of six memorial slabs in memory of priests on the teaching staff who died there but are buried elsewhere. St Mel’s Cathedral crypt is the resting place of twelve bodies, including that of Bishop William O’Higgins.  Outside, are five monuments, including one to Bishop James J McNamee, who died in 1966.  Templemichael old church and graveyard, situated along the canal and mall walk, is seldom seen in its sequestered location and has four, well-defined headstones and a number of other grave-marking stones.  Among the most interesting headstones there are those of the McCloughrys who came from Scotland to Ireland, first to Donegal and then to Cleghill, Longford where a son William settled.  He died in 1713 aged eighty-two.  In the US two McCloughrys died in the gun fight at the O.K.Corral, while a later member of the family, Robert Wilson McCloughry (d. 1920) worked on the development of fingerprinting as an aid in combatting crime.

This book is a veritable treasure house of information which must be welcomed by the many families whose forebears are buried in the locations mentioned above.

It is a record for present and future generations of local history and family researchers both at home and among the diaspora. Both authors and photographer Michelle Ghee are to be commended for their initiative and perseverance and Keith Millar for his design.

The book, extremely good value at €15, is flying off the shelves and is available locally.