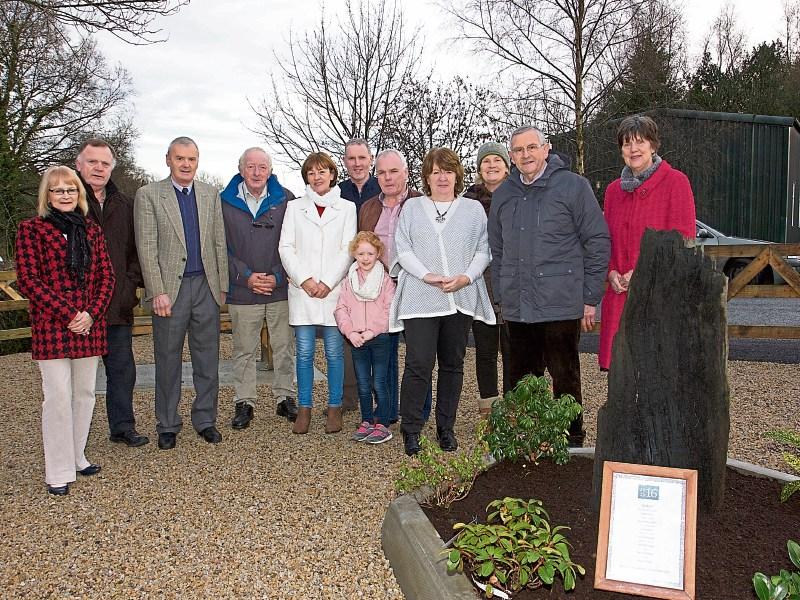 The official opening of the 1916 Centenary Memorial Garden at Leebeen Park, Aughnacliffe took place in beautiful winter sunshine on Saturday.

Longford County Council Cathaoirleach, Cllr Mick Cahill unveiled a copy of the Proclamation inscribed in granite before an impressive attendance of Council members and officials, local organisation personnel, members of the public and the Chairperson and Members of Leebeen Park development Ltd.

The tricolour was raised by Project Manager, Vincent Hawkins and his team and the facility was then blessed by Fr Seamus McKeon PP, Colmcille who congratulated the committee members on their vision and their persistent hard work in bringing their dream to finality.

Introducing the simple but impressive ceremony, Committee Chairperson, Gearoid Mulligan said that it was a culmination of a year's hard work and thanked those who had brought it to fruition including the members and staff of Longford County Council and he apologised for the unavoidable absence of County Librarian, Mary Carleton-Reynolds, Archivist - Martin Morris, Local Church of Ireland Rector, Canon Hicks and former Councillor, Sean Lynch.

He welcomed current Council members, Luie McEntire, Micheál Carrigy, Seamus Butler, Paraic Brady, John Browne and Cathaoirleach Mick Cahill on his first visit to the area and he noted the attendance of the County Heritage Officer  Mairead Ni Chonghaile whom he thanked for her continuing support.

Cllr Cahill said that he was very pleased to have been invited to take part in the special event and said that the committee had done a wonderful job on the Remembrance Garden which was a very fitting tribute to the heroes of 1916.

He went on to recall the major part played by North Longford in the fight for independence noting in particular General Sean MacEoin and his North Longford Flying Column comrades including Sean Connolly, Pat Cooke, Paddy Lynch, Tom Brady and Larry Geraghty who served  with distinction in several operations all over this region having themselves been inspired by the events of the 1916 Rising and the ideals of the Proclamation.

Cllr  Cahill continued: "I would like to warmly congratulate everyone involved. As well as remembering the people who helped found our State, this beautiful amenity will be a fine place for  Colmcille and neighbouring parishes to relax and reflect on the birth of our nation.

“The Memorial Garden and Leebeen Park will be enjoyed by people into the future and will inspire future generations to take pride in our history and to commemorate that history themselves.

“In conclusion, I wish all of you a very Happy Christmas and a prosperous New year.”

Before the raising of the tricolour, former St Colmcille's NS Principal, Kieran Tonra was invited to read the special prize-winning poem composed by his grandson, Tadhg O'Dalaigh for the National Oireachtas Easter Rising Centenary competition earlier in the year.

Tadhg  won first prize in the under 14 Youth Section of this prestigious national Irish Language festival.  Then, as the national flag was raised, Aine Smith from Glenmore gave a beautiful rendition of Amhran na bhFiann.