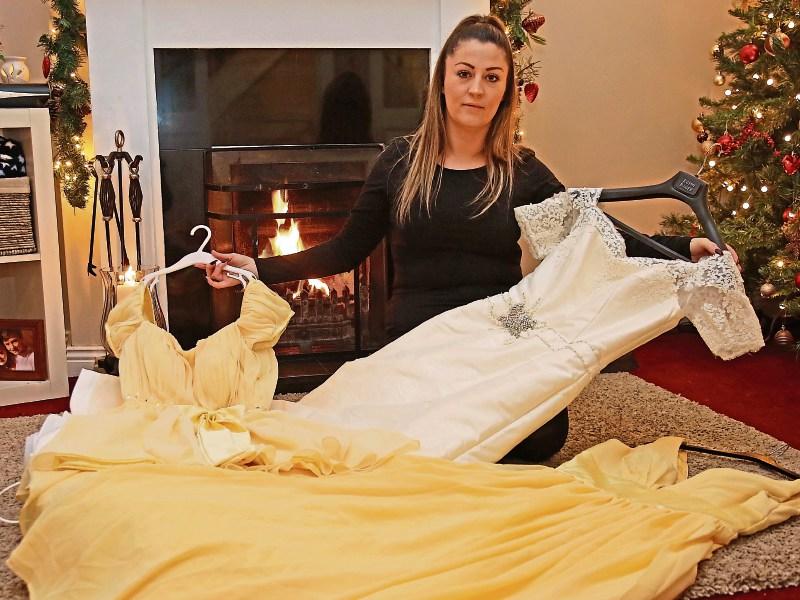 Christmas is known as the season of giving, and one Longford mother-of-three  is leading by example in that regard.

Charlene Donlon from Newtownforbes is auctioning off her wedding dress, three bridesmaids' dresses and a mini-bridesmaid dress in order to help the homeless in Dublin this Winter.

“I got married in Tenerife in 2013,” Charlene told the Leader.

“My dress is actually a Benjamin Roberts dress, it's a designer dress, but when I bought it, it was just a plain dress.”

A few slight alterations and embellishments later, and Charlene's dress became a one-of-a-kind piece for her special day.

The bridesmaids dresses are full-length, chiffon numbers, and they, along with the mini-bridesmaid dress, are a beautiful lemon colour.

“I just wanted to give something back,” Charlene said. “My sister helped me set up everything on Facebook and the rest of the family have been very supportive.”

The competition has been shared numerous times on Facebook, but there are plenty of spaces left to enter.

To enter the competition, each participant must pay €35. They will be allocated a number, which will correspond with the numbers in the Lotto draw.

Once all the numbers are filled, the winner will be decided by the Lotto draw, where the person holding the number of the bonus ball in the main draw  takes  away five stunning gowns.

With the money, Charlene plans on taking her two eldest children, as well as her niece and nephew, to do some shopping for the homeless. They will then deliver their thoughtful care packages in person.

“You just have to private mail me on Facebook and pick your own number,” Charlene added.

“The winner will be chosen by the bonus ball in the main draw when the numbers are filled!”