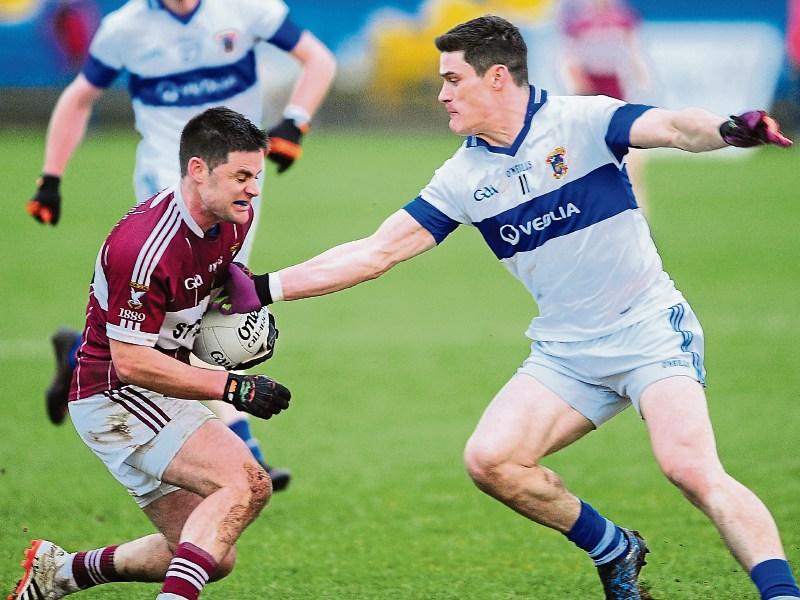 While Mullinalaghta were left to rue some costly missed chances in the first half, taking on the might of St Vincent’s was always going to be a most difficult task and so it proved as the Dublin giants eventually got on top to win the Leinster Club Senior Football Championship semi-final by the comfortable margin of seven points in the finish.

But the final scoreline was hardly a true reflection on the actual trend of the game watched by a big attendance (around 2,500) in damp conditions at Glennon Brothers Pearse Park on Sunday last as just a solitary point separated the sides when the generally prominent Gary Rogers fired over a cracking long range score midway through the second half.

That sweet strike from Rogers was the first score on the changeover but Mullinalaghta had a very lucky escape when a shot from St Vincent’s No 9 Shane Carthy hit the post in the 39th minute.

Just before that close call, a dipping kick from Rian Brady drifted narrowly wide while the dangerous St Columba’s corner-forward slipped in front of the posts as the Longford champions attempted to engineer a possible goal chance in the 41st minute.

St Vincent’s   registered a lot of  wides in the second half (eight in total) which was clearly a cause of concern for their manager Tommy Conroy.

Changes were made as Joe Feeney (the Armagh county player) and Albert Martin were both brought on in the 41st minute and another double substitution was made in the 49th minute when Nathan Mullins and Kevin Golden were introduced.

That made a decisive difference as the scores began to flow again for the visitors, inspired by a tremendous point from Dublin All Star Diarmuid Connolly who was bang on target from a tight angle near the sideline in the 47th minute as he showed his class.

Two more well struck points from Shane Carthy and Albert Martin in quick succession really put the pressure on Mullinalaghta but they were given a glimmer of hope when David McGivney converted a free in the 54th minute following a foul on Rian Brady.

A further point apiece were then exchanged between Joe Feeney and David McGivney (free) with the score now standing at 1-11 to 0-11.

That  was as good as it got for Mullinalaghta whose hopes of springing a sensational shock were eventually dashed when Enda Varley put Shane Carthy through and he planted the ball in the roof of the net with 59 minutes gone on the clock.

St Columba’s, to their credit, battled it out to the bitter end and James McGivney had a goal attempt well saved by the opposing keeper Michael Savage.

St Vincent’s had the last say when the impressive Shane Carthy kicked over another point to emerge as the chief marksman with 1-3 to his credit and all from play.

It did not matter when John Keegan was sent-off in the third minute of stoppage time on the stroke of the final whistle but apart from that incident it must be said that the big Mullinalaghta midfielder produced a fine performance.

Rian Brady (hampered by a dead leg injury in the second half) was excellent in attack and caused some serious problems for the St Vincent’s defence throughout the first half.

But the marino machine still managed to lead by 1-7 to 0-8 at the break with the playmaker Diarmuid Connolly setting up the crucial goal in the 15th minute. A brilliant ball in from Connolly picked out Enda Varley and he raced through before providing the perfect pass across the face of the goalmouth to the unmarked Tomas Quinn who flicked the ball to the net.

That left Mullinalaghta trailing by 1-2 to 0-3 with their scores in the first quarter coming from David McGivney (free), Rian Brady and Jayson Matthews (free) while Cormac Diamond and former Mayo footballer Enda Varley replied for St Vincent’s.

After conceding the goal St Columba’s came storming back to enjoy a glorious spell which yielded three terrific points through Rian Brady, James McGivney and defender Shane Mulligan between the 16th and 19th minutes to lead by 0-6 to 1-2.

Then it was St Vincent’s turn to take control as points were scored by Shane Carthy, Tomas Quinn (free) and Ruairi Trainor before Gary Rogers burst through to shoot over the bar in the 26th minute to leave the home side trailing by just the minimum of margins, 1-5 to 0-7.

But Mullinalaghta paid the price for some indiscipline as a St Vincent’s free was brought forward for dissent and was duly converted by former Dublin star Tomas Quinn.

Enda Varley then broke through with a good chance of a goal but he elected to fist the ball over the bar.

St Columba’s, guilty of kicking five wides in the first half as compared to just two for the opposition, pulled a point back in stoppage time when Jayson Matthews was on the mark from a free.

As hard as they tried in the second half, Mullinalaghta were unable to break down the resolute St Vincent’s defence and were restricted to just three more points on the changeover through Gary Rogers and a brace of David McGivney frees.

St Vincent’s, utilising their superior physical strength to good effect and particularly so when the big substitutes came on, added another 1-5 to their tally in advancing to the Leinster Club SFC final against the Offaly champions Rhode.

But the kings of Dublin had to withstand a fierce fight from the Mullinalaghta bravehearts who brought great honour to the county with their brilliant run to the last four in the provincial series.