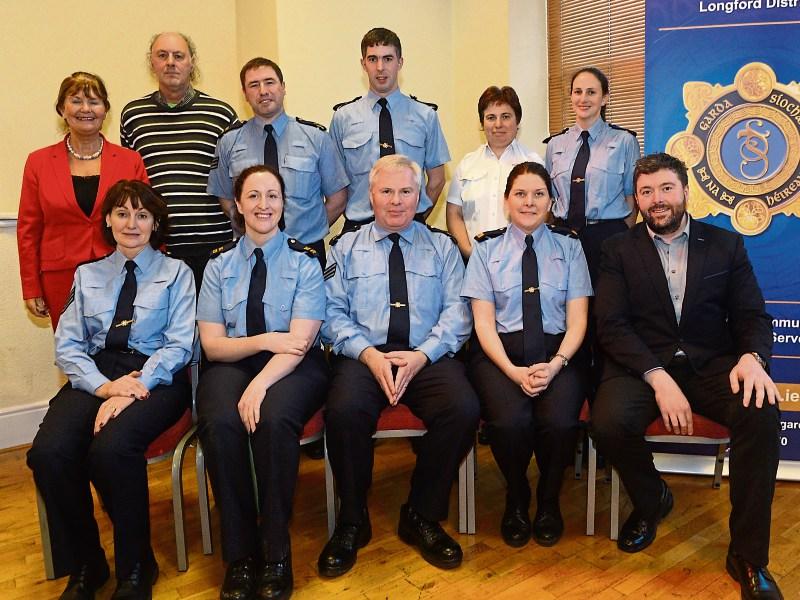 A new way of dealing and combating crime in communities across the county was unveiled in Longford town’s Temperance Hall last week.

The pilot  Crime Prevention Ambassador Programme, aims to tackle both the reality and perception of crime amongst older people in communities across Co Longford.

It was launched last Thursday in front of around 30 interested observers as well as members of Longford’s recently incepted Older Persons Council.

Many of those volunteers, armed with information packs and a detailed presentation from local gardaí, were told of the importance they can play in delivering crime prevention advice while also addressing the fear of crime in their own communities.

“All of us have one thing in common-all of us are getting older, all of us care about our county and all of us want to make a better county for everyone to grow old in,” she said.

The key designs of the plan were, however, provided by the programme’s chief protagonist, Sgt Lionel Mullally.

He said despite a similar idea having been launched in Cavan, Monaghan and Meath, this was Longford’s chance to set in motion the backdrop upon which garda policing would be shaped for years to come.

More pointedly, the Community Garda Sergeant said he and his colleagues were motivated by a desire to change both the reality and perception of crime throughout Co Longford.

“If it’s a case that crime is either falling short or going down that’s great,” he said.

“We will trumpet it, we tell everybody how wonderful we are but if the perception among people in this town and county is that it’s not safe to walk the streets or it’s not safe to go to certain areas then we are failing in our jobs, not just ourselves but  so is the Council and all the other parties that are invested in making Longford a better place.

“What happens in that case is the perception becomes far more real than the reality of the facts and figures. I can say that burglaries and thefts are down, which they are, but if if people aren’t prepared and are afraid to leave their house after 5pm or 6pm or if there are  afraid to walk down certain streets then there is something wrong and we have to tackle that.”

He said the onus was now on the 30 or so volunteers present to deliver that message to their local communities with feedback from those discussions scheduled between gardai and local activists before Christmas.