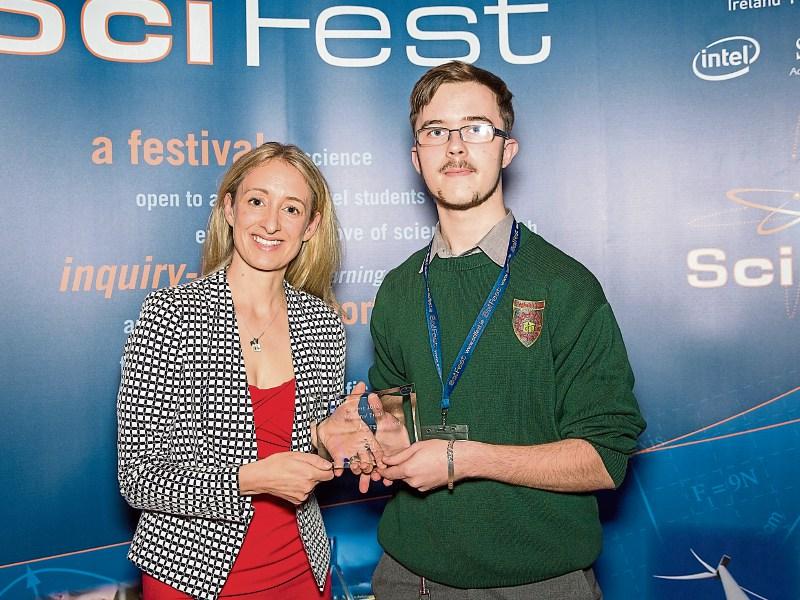 Fifth year student from Lanesboro Community College competed among the top young scientific minds at SciFest 2016 and he was awarded an Excellence in STEM award, for his project ‘The Digitalisation of Farming’.

Will Dennigan was one of 58 students involved in the exhibiting of 31 STEM projects at the national final held in the Marino Conference Centre in Dublin recently.

The aim of Will’s project is to bring farming into the digital era.

To do this Will used various methods such as creating Herd Checker by developing a web database app using HTML and using python scripts run through the Raspberry Pi to create an automated feeder.

He explained; “This allows farmers to get up to date medical information about their livestock, as well as feed their cattle from over half the world away!”

Sheila Porter, SciFest CEO, said: “The standard at SciFest is always extremely high and this year is no exception. The aim of SciFest is to foster and develop a love of STEM, and to imbue every student with the skills of self-directed learning. In that regard, this year has been a huge success.”

Ruth Freeman, Director of Strategy and Communications at Science Foundation Ireland said: “I wish to congratulate Will and all the students as well as their families and friends. Ireland is a global leader in many aspects of STEM and if we wish to build on this success in the future, we must encourage a love of STEM among our young people.”

Ms Freeman concluded, “I am sure that some of the students that reached the national final will be the leading scientists, technology experts, engineers, and mathematicians of the future.”