Waters talks writing, the media, newspapers and politics at the Longford Library 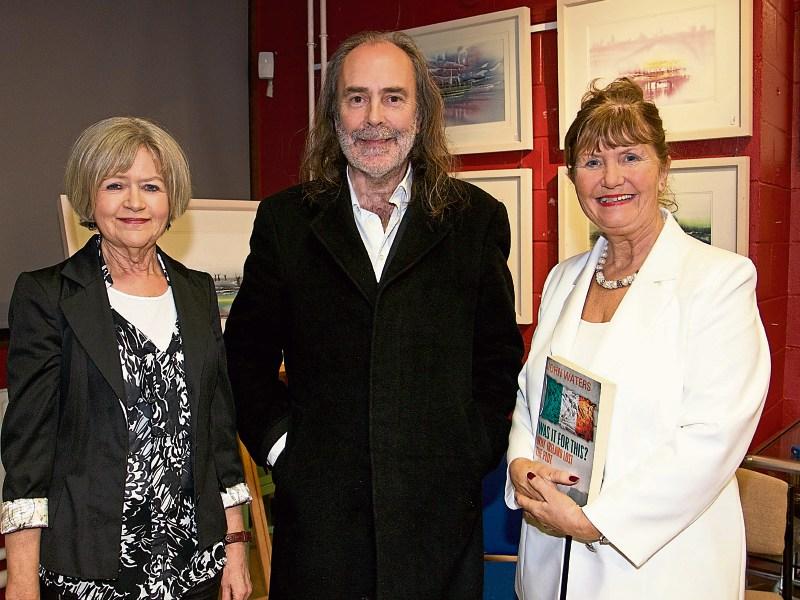 It was a large and interested crowd that greeted writer John Waters when he visited the Longford Library on Wednesday,  November 16.

The former columnist delivered a talk entitled; 'The Second Coming of the Page: a Reflection on the Importance of Paper in the future of Democracy, Literature and Humanity'.

Co-organised by Ardagh Book Club, the event proved to be educational and entertaining in equal measures.

Described by County Librarian Mary Carleton Reynolds as “fearless and fascinating”, the Castlerea native told the audience about the division between imaginitive and factual writing.

“I've stopped being a journalist now in the last year and a half and I'm glad of that in many ways but not least because I actually don't think it's possible to write fiction while you're occupied with journalism; while you're constantly preoccupied with what's going on in the world.

“You're looking for ideas, you're listening to the radio, you're watching TV.”

Speaking about advances in technology, and the effect that they have had on writing and on the media, Waters first made the point that there is a distinction between the internet and the world wide web; the former being the technology and the latter being a culture that has developed through that technology.

Waters shared his belief that the relationship between the writer and the reader has changed because of the web, and he illustrated this point by comparing the letters section in a newspaper to the comments that are left on websites and social media.

He also added that there was a neurological difference between reading on screen and on the page, and the effect that hyperlinks have on the way you read and remember an article or story.

Describing the media as the 'fourth estate', Waters predicted that all newspapers, with the exception of freesheets, will be gone within a decade, but he is hopeful of a resurgence of the printed page.

Waters ended the evening with a lively question and answer session, during which he spoke about his experience in Chicago  as the results of the US Presidential  election unfolded.

“This could be a bit controversial,” he laughed.

“I have been observing the  American election for over a year now and it's been absolutely fascinating when you go right into it.

“And here, having slagged off the internet for the last hour, I want to now say that the internet is at this level, a very useful tool if you know how to use it.”

Revealing that he had been moved by some of President Elect Donald Trump's speeches, Waters revealed his opinion that Trump will make a great President.

“He has a lot to prove and nothing to lose,” he reasoned.

Thanking the esteemed writer for his time, Chairperson of Ardagh Book Club, Mary Lyons then addressed the crowd.

“It's always interesting to hear the voices that challenge our world view and shake us out of our comfort zone and John generally does that very well,” Mary said.

“I think he managed it spectacularly here this evening,” she added, to much laughter.

Paying tribute to County Librarian Mary Carleton Reynolds for her constant, unfailing support and enthusiasm, Mary revealed that the  County Librarian was celebrating her 25th year in the role.

“Mary, I'm sure I speak for other book clubs in the county, as well as the writers groups, artists, historians, researchers, students, children and readers who use the library services, when I say that we are very fortunate indeed to have you as our County Librarian

To mark this incredible achievement,  Ms Carleton Reynolds was presented with a framed copy of the highlights of her 'Day in the Life'  interview with  the Irish Times.