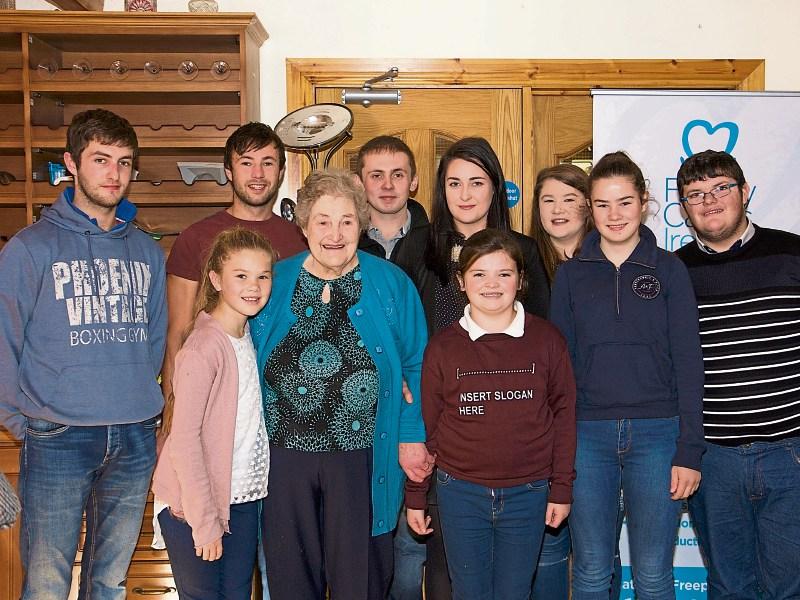 Earlier this month Marie Dalton (81) from Ballymahon was selected as this year’s Longford Carer of the Year which was run in conjunction with Family Carers Ireland.

The Longford woman has been caring for her husband Pat (85) for the last 20 years.

In the mid 1990s Pat became diabetic and later lost his eyesight.

He has been blind for over 20 years and his wife Marie has taken care of him ever since.

As Marie herself says, “We said for better, for worse on our wedding day.”

She is always on red alert in relation to Pat’s needs, even during the night.

And all the while, she is concerned most about her husband’s welfare; afraid that he would fall and hurt himself or worse still; bang into a wall or trip.

“Pat could call me any time during the night,” she adds, before pointing out that he likes to get up early in the morning and start the day with a good hearty bowl of porridge and a strong cup of tea.

“I get him up and I dress him,” Marie tells the Longford Leader.

“Then I take him to the kitchen and put him sitting down in his usual chair and then I make him breakfast.

“He likes porridge and tea and I would put all that into his hands and his tablets too.”

Meanwhile, Pat’s bloods have to be taken so before sitting down and chatting with her husband for a while, Marie does the bloods.

“I talk to him and tell him everything that is going on outside,” she smiles.

“He likes to know what is going on and he likes to hear all about the family as well.”

This year, Marie and Pat celebrated their 51st wedding anniversary.

The couple have four children - one son and three daughters - and they also have ten adorable grandchildren.

One of the couple’s daughters lives close by and she offers constant support and help to her parents.

Meanwhile, as the afternoon kicks in, Marie prepares the dinner for herself and Pat and ensures that he is able to eat it.

She often worries that something will happen to him.

“I would be afraid that he would walk into a wall or something like that,” she adds before pointing out that in the 20 years since Pat became ill her taking care of him is just part and parcel of everyday life for the Daltons.

Pat was in his mid 60s when he became ill.

The couple farmed the land together and Pat was also a lorry driver.

To this day, Marie still tends to the farming side of things.

“I do it myself now - we just have cows and suckler calves, but I do what has to be done,” she continues before adding that she was once a regular at bingo but because of her husband’s illness she stopped going so she could spend more time with him.

She says she wasn’t able to leave her husband alone.

“I stopped all that because I just couldn’t go and leave him on his own,” she adds.

So, how does Marie keep going?

She tells the Leader that her faith is strong and she firmly believes in the power of prayer.

“Pat too has great faith and I just thank God that I never let anything happen to him.

“I hope that I am taking good care of Pat and I pray that God will leave me the strength to keep doing it”.

Meanwhile, Denise Nolan, Area Manager for Longford/Westmeath with Family Carers Ireland says Marie Dalton is one of 4,933 family carers across the constituency.

“Marie has taken care of her husband Pat for the past 20 years and has done so without very little recognition,” she adds before pointing out that most family carers take care of loved ones “as part of their daily lives”.

“The Carer of the Year awards provide us with an opportunity to recognise the great work that family carers do and to say thank you to them.

“Marie is a very deserving recipient of the Longford Carer of the Year 2016 award and we wish her all the very best.”