Mourners line out to bid farewell to popular Longford couple 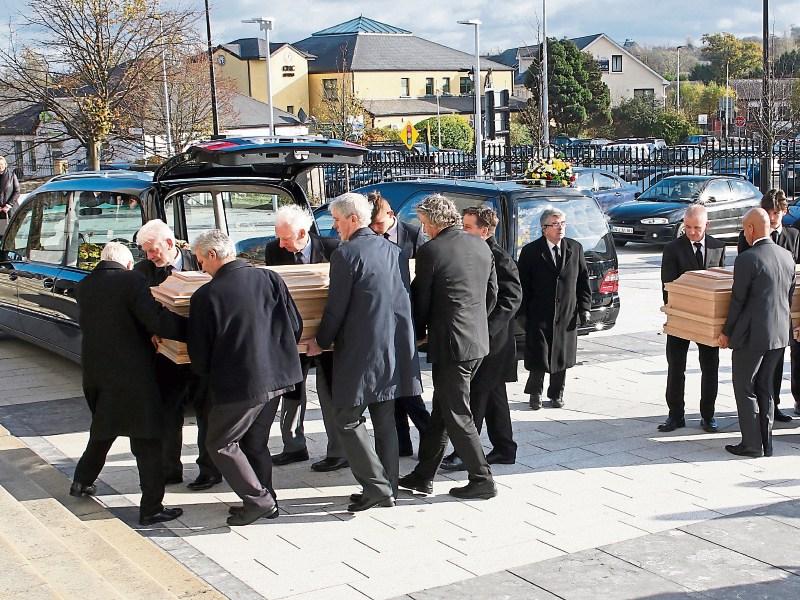 St Mel’s Cathedral was overflowing with mourners on Wednesday as they came to pay their final respects to Longford town business couple, Jim and Anne Reynolds who passed away within 24 hours of each other on the weekend of November 5 and 6.

Chief celebrant at the Funeral Mass was Fr Tom Healy and he told the congregation, “Anne and Jim were very devoted to each other throughout their married life. They had enormous respect for each other, they enjoyed a playfulness in the relationship that brought out the best in each other.

“I’m told they were great ballroom dancers and when they glided over the floor together they were like poetry in motion.”

Describing the deaths of Anne and Jim as an ‘immensely emotional, stressful and heart wrenching time for the Reynolds family’, Fr Healy added, “We can’t begin to imagine the pain and distress you are feeling as you lay both your parents to rest. And amid the tears, the pain, sense of loss and tragedy of this time, most people will agree that there is something strangely beautiful and poignant about Jim and Anne being called home to the Lord together.”

The Reynolds are best known locally for the Longford Arms Hotel which is now being ran by their daughter, Orlagh.

Together with his late brother and the former Taoiseach, Albert, Jim was also one of the country’s leading music promoters and a pioneer in the dance hall era.

Fr Healy said Anne  was a very graceful, elegant woman and teacher. “She was a warm and welcoming homemaker, hospitable and kind, and was placid in  nature.”

He spoke of the blow it was to the family when shewas diagnosed with 'the cruel disease of Alzheimer’s’ 19 years ago and the wonderful care she received at Laurel Lodge. “It is altogether amazing that while her health was so very poor for long years that in some way she managed to hold on to life until the time came for Jim’s departure. Some would say she waited for him to accompany her from this world together.”

Hailing from Rooskey, like Jim, Fr Healy said they always got on well. “Jim was always interested in and supportive of our various projects including the restoration of the Temperance Hall and more recently the cathedral here. He was always encouraging of our efforts.”

Fr Healy continued, “Back in the day, Jim, along with his brothers Albert and Joe, were pioneers of the dancehall industry. Together, they were ambitious, hard working and far seeing. Jim had tremendous business acumen. Jim’s name was known far and near for his dancehall empire and I have to confess to being a closet fan of the showband era and took to the dancehall a few times in the late 70s in the Cloudland. And thanks to the wonder of YouTube I found myself listening with great nostalgia to The Swarbriggs, Roly Daniels and Dickie Rock over the last few nights and I’m sure some of the names from that time are here today to pay their own tribute to Jim.”

In a moving eulogy, Anne and Jim’s son James recited the poem ‘Footprints’, while daughter Angela poignantly recalled the story of how her parents met for the first time and danced together in the Tower Ballroom in Tarmonbarry.

Son John then revealed that their mum Anne wrote in her diary after that first meeting with Jim, “Tonight I met Jim Reynolds, I love him.”

Referring to Alzheimer’s as the ‘Isis of the brain’, John said his mum defied all medical logic and they often wondered what kept her going.

He concluded, “It is only with the events of last weekend that we now know. She was not leaving this world without her Jim. As sad as it is, it is also comforting and beautiful that in the end love conquers all.”

Anne (nee Lenehan) and Jim were laid to rest in Ballymacormack cemetery and sympathy is extended to their loving family, daughters Angela and Orlagh, sons John and James, daughter-in-law, son-in-law, Jim’s sister Teresa, his sisters-in-law, their grandchildren, nieces, nephews, relatives and friends.