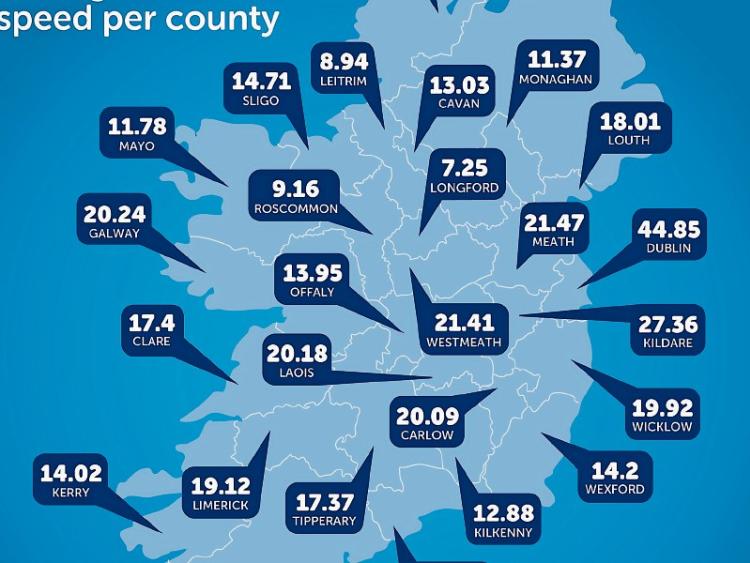 News that Legan, Co Longford has the slowest broadband speed  in the country has not come as a surprise to locals.

In new data, released by comparison site Switcher, it was revealed that Longford’s broadband is the slowest in the country, with an average speed of 7.25Mbps.

The slowest broadband area was Legan, with an average download speed of 1.98Mbps, compared to the 72.15Mbps recorded by the fastest area in the country; Drimnagh, Dublin 12.

It was further revealed that Legan's broadband speed is almost 12 times slower than the national average.

“Broadband has been an issue in south Longford for years,” revealed Legan native, Cllr Paul Ross.

“We are not surprised to see what has come out in the media today as it has been a problem for years.”

Cllr Ross said such was the slow nature of the broadband speed, a local grocery store was unable to facilitate customers in their attempts to pay for their bin service charges.

"Mulleady's use a top up system but the local shop in Legan can't provide that because the laser company Mulleady's work with use a fixed line broadband connection and we (Legan) haven't got that.”

Cllr Ross said the absence of such a service was not only hindering local businesses in their efforts to make ends meet, but was also forcing local homeowners to do their shopping elsewhere.

The Fine Gael councillor said of more immediate concern was the fact some some former parishioners had been forced to sell their homes in a bid to access higher broadband speeds.

"Every house in this day and age needs broadband especially when children are now using iPads at school and more people are using Facebook, emails and downloading various types of data.

"And I know of two families who had been commuting to Dublin and looked to work one day a week at home but who sold their house because they can't do their work from home," he said.

For more on this, see www.longfordleader.ie