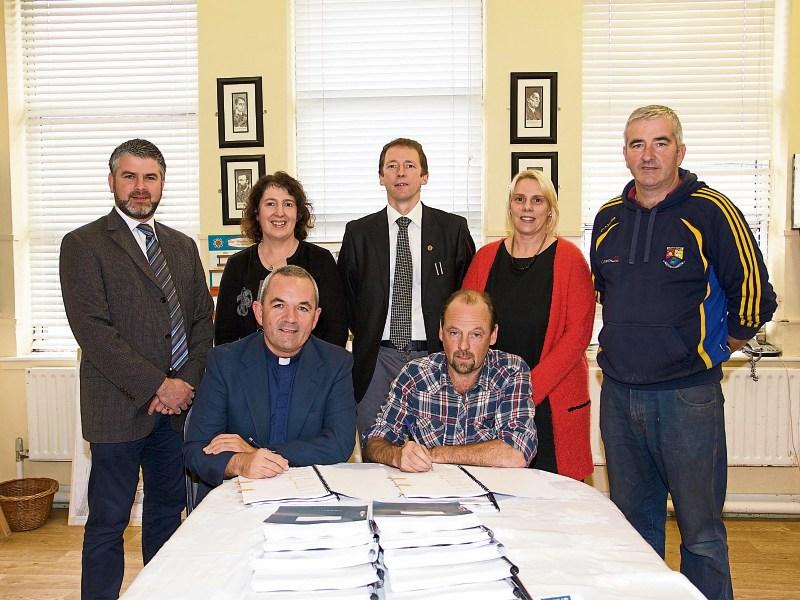 Last Friday marked an exciting milestone for the school community of Stonepark NS, as the contracts for the new school building were signed.

What's more, it is hoped that the new school will open in 2018, 125 years after the original school building was opened.

Giving an insight into the history of the current school building, Principal Meriel McCord explained; “There were schools on this site from the 1840s on.

“Prior to the opening of national schools by the government of the time, there were at least twelve hedge schools from here to Kenagh. This highlights the importance of education to those who came before us.”

Ms McCord then revealed that Stonepark NS was a three-teacher school for a while in the 1920s, but returned to a two-teacher school up until 1977. The school, and its community, has continued to grow since, now boasting a staff of 22, and 240 pupils.

“Back in 2006 we were at the tendering stage for a new 10-classroom extension, when we were notified that we were not included in the building project at the time,” Ms McCord continued. “After much campaigning, last October [then] Minister for Education, Jan O'Sullivan announced that our 10-classroom building project would be prioritised in the five-year development plan.

“It's an occasion of great joy for all of us staff, parents, pupils and parishioners that this day has come,” Ms McCord smiled. “We are delighted to have Sammon Builders from Aughnasheelin, Co Leitrim as the builders on site.

“The Board of Management and I look forward to working with them.”