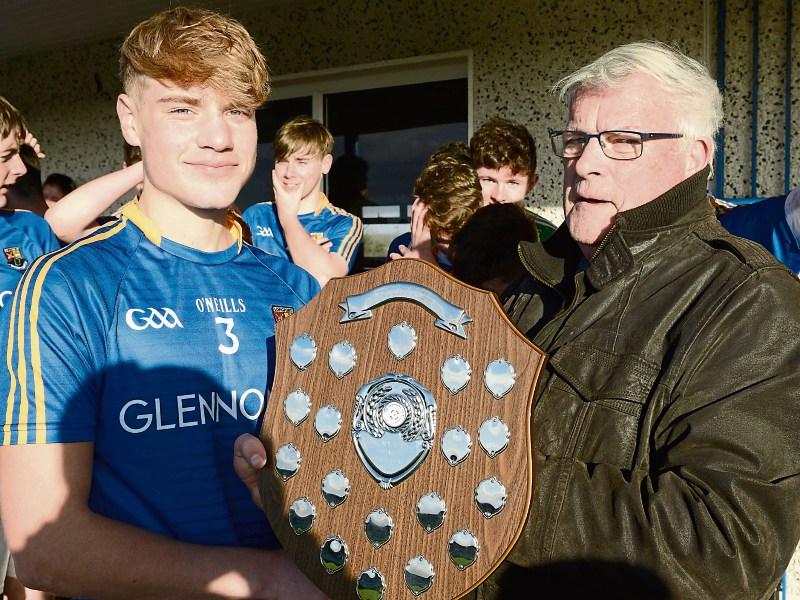 In the special competition confined to the teams who finished bottom of the four groups in the Fr Manning Cup Football Tournament proper, there was some consolation for the Longford U-16 footballers who scored a well deserved win over neighbours Leitrim in the plate final at Glennon Brothers Pearse Park on Saturday last.

Rocked by a Leitrim goal with less than a minute gone on the clock when corner-forward Jordon Reynolds shot to the net, Longford recovered from the bad start to fire over three points in a row - a brace from Dylan Farrell (play and free) with Jordan Shiels also on target.

Shiels went close to scoring a goal in the 7th minute when his effort was well saved by the opposing keeper Jack Gallogly but Leitrim regained the lead in the 16th minute when their dangerman Jordon Reynolds cut in from the left to finish the ball to the net.

Longford refused to be rattled and with the advantage of the wind they came storming back to register 1-4 in a dominant spell with midfielder Kian Gilmore breaking through to fire home a cracking goal in the 21st minute.

Dylan Farrell (free), Oran Kenny, Diarmuid Sheahan and Aidan McGuire (free) accounted for the points with Kenny unlucky not to score a goal when he was denied by the Leitrim keeper Gallogly who produced a point-blank save in the 24th minute.

Despite kicking seven wides (including a couple of frees) in the first half, Longford ended up leading by 1-9 to 2-2 at the break with the other points coming from Sheahan and Niall Finneran while Jordon Reynolds and Mark Diffley (free) replied for Leitrim.

The visitors made a bright start to the second half to close the gap with a point apiece from Diffley (free) and Aaron Hoare but Longford consolidated their grip on the game with a point from Dylan Farrell (free) and a very well struck goal from Diarmuid Sheahan with six minutes gone on the changeover to establish a comfortable 2-10 to 2-4 lead.

From there on it was always going to be a real uphill battle for Leitrim and they were twice denied goals by the Longford keeper Eoin McGuinness who made a couple of fine saves in the second half before he was eventually beaten again when a free from Leitrim full-forward Oisin McLoughlin was deflected to the net in the 56th minute.

That left just two points separating the sides, 2-11 to 3-6, as Leitrim kept in touch with a point apiece from McLoughlin (free) and Mark Keegan while Aidan McGuire (free) was on the mark for Longford in the 47th minute.

McGuire converted another couple of frees in the closing stages to make certain of the success and this was a fine overall team performance by Longford who played some good football to earn the distinction of becoming the first winners of the Fr Manning Plate.