Lanesboro students savour trip of a lifetime to Munich 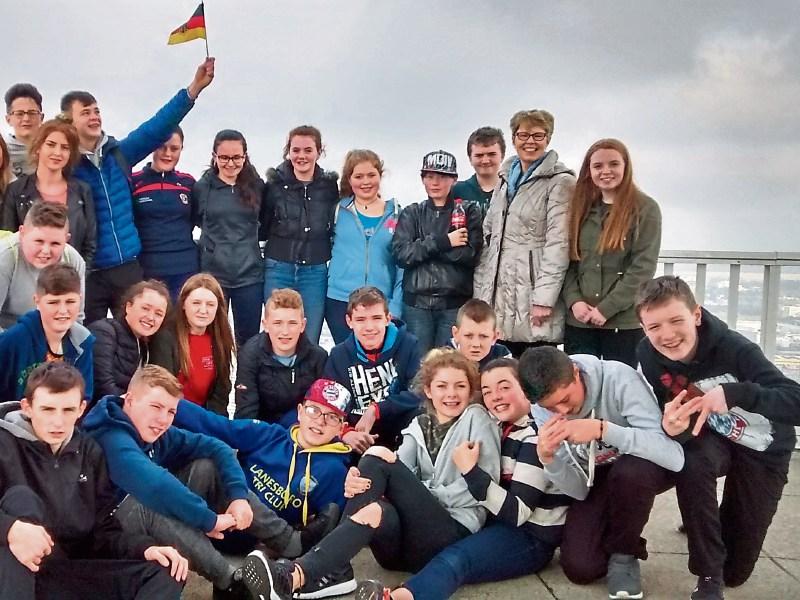 On the pitch black Friday morning of October 7, 38 students and four teachers met at Lanesboro Community College at 2.30am.  The second and third years were heading off to Munich, Germany for four days.

The students were buzzing with excitement on the way to Dublin airport and there were some tired and grumpy heads also.  We touched down in Munich at 10.20am German time and the hectic schedule began with a panoramic tour of the city, which was very interesting, and a great introduction to Munich.

Then it was off to the BMW Museum and BMW World which was one of the coolest places we have ever visited.  It was amazing to see all types of cars and motorbikes made by BMW and how they have changed over the years.  We were even allowed to get in the cars and pretend we were driving them.

We then checked into Haus International which was our accommodation for the next four days. The next morning we were up bright and early and travelled to Dachau Concentration Camp Memorial Site.  We were given a guided tour which was very interesting but very sad. We learned a lot about the Holocaust and experienced an amazing history lesson. After that we went to Schleissheim Palace which is an incredible Baroque Palace with fantastic gardens.  It was built by the rulers of Bavaria and is known as the mini Versailles of Munich.

The evening finished with a visit to Galaxy Erding Water Park which is Europe’s biggest waterslide park and the world’s largest sauna complex. In 1983 American Oil Company Texaco drilled here looking for oil but instead of oil they found naturally heated water and that is how this place started.

On day three we got a guided tour of the Bavaria Filmstadt which is one of Europe’s most well-known film studios. Here we experienced a great tour, saw some amazing props from films and even got to take part in making our own short films.

We then visited Deutsches Museum which is the World’s largest Museum of Science and Technology. There are over 28,000 objects from over 50 fields of science on display here. Our guide told us that if we were to spend three minutes looking at each display for eight hours a day it would take us nine days to see everything!  So although our two-hour tour was only the tip of the iceberg, it was very interesting and exciting.

Later we enjoyed an evening of bowling and some of us found out we had hidden talents for the game.

We all woke up on Monday morning, sad that it was our last day. We had our suitcases packed, gave back our keys, checked out and headed to the Allianz Arena, home to Bayern Munich FC. We got a great tour of the arena which included the stands, dressing rooms, and Press room and players' tunnel.

We then visited Olympic Park which was built when Munich hosted the 1972 Olympics. We went up the 200 meter Olympia Tower and enjoyed some incredible views of Munich and the surrounding area. On our way to the airport we had some time for shopping, getting some last minute presents and souvenirs for our families.

Unfortunately all good things come to an end and before we knew it Denis, our German bus driver for the tour, had us all at the Aer Lingus check in at Munich airport. We touched down on Irish soil late Monday night and we were met by our parents at Lanesboro Community College when the clock struck midnight.

This was the trip of a lifetime and we will have great memories for many years to come.

We would like to thank our parents, all our fellow students and our accompanying teachers, Ms Bannon, Mr Sweeney, Mr O’Brien and especially our German teacher, the tour organiser, Ms. Sheehan.