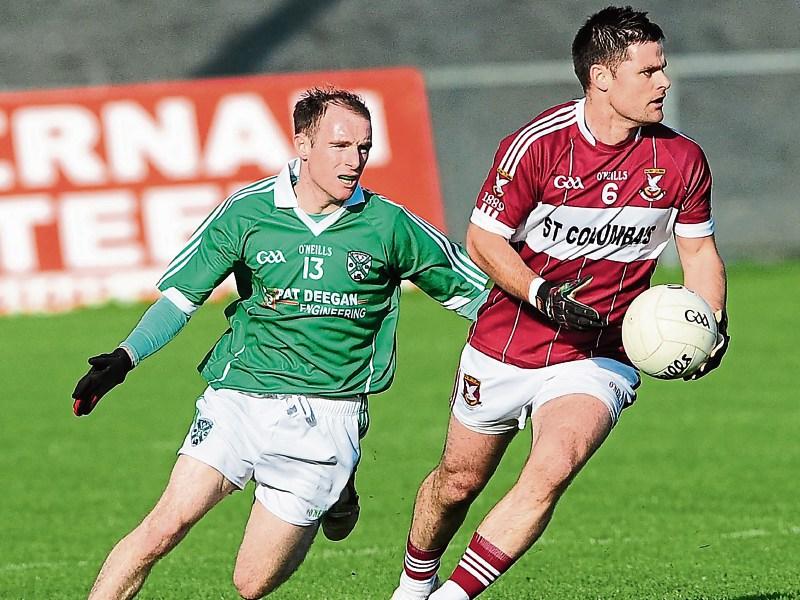 Competing in the Leinster Club Senior Football Championship for the very first time, mighty Mullinalaghta created another piece of GAA history when they scored a great win over Laois opponents Stradbally on Sunday last.

Watched by the official attendance of 1,683 on a fine day with the sun shining, this highly entertaining opening round clash was played in perfect conditions at Glennon Brothers Pearse Park as St Columba’s overcame the handicap of kicking a total of 12 wides to emerge victorious.

The gutsy Longford champions, showing the much greater hunger throughout the contest, certainly did not deserve to be trailing by 2-6 to 1-7 at the break but it all came good for the north Longford outfit in the second half with the dismissal of prominent Stradbally midfielder Darren Maher proving to be a significant factor in the eventual outcome.

Maher received a straight red card for a heavy challenge on James McGivney with just three minutes gone on the changeover and the extra man advantage eventually began to tell as Mullinalaghta outscored a visibly shattered Stradbally side by 0-10 to 0-3 in the second half to win with some comfort in the finish.

While it was a great team effort by Mickey Graham’s charges, the full-forward-line were a constant threat (and the impressive Rian Brady in particular who shot some terrific points) with the hard working Gary Rogers also very much to the fore in the sharp St Columba’s attack.

John Keegan and David McGivney came a lot more into the game at centrefield in the second half after Stradbally were reduced to 14 players and this was a major turning point as Mullinalaghta got on top thereafter to earn a crack against the Westmeath champions St Loman’s Mullingar in the quarter-final at Pearse Park on Sunday week, November 13th.

Inspired by the driving force of Donal McElligott and Shane Mulligan in the half-back-line throughout the second half and with James McGivney also making his presence felt, St Columba’s won by five points in the end.

With home advantage again in the next round they will be quietly confident of causing an upset against a strong St Loman’s side, who got a late goal in their 1-13 to 0-10 win over Tyrrellspass in the Westmeath county final on Sunday last.

18 scores was a terrific tally from Mullinalaghta, with all of the six forwards on target, and they were forced to field without the injured Ruairi McElligott with David McGivney linking up with John Keegan at midfield.

St Columba’s got off to a great start to lead by 0-4 to 0-0, a brace of cracking points from Rian Brady with Jayson Matthews and Aidan McElligott (fisted effort) also on target in the early stages of the game.

Back came Stradbally (who shot just two wides in the entire game) to hit three points in a row through Padraig Fitzpatrick, wing back John Donohue and Jody Dillon to leave just the minimum of margins separating the sides with 12 minutes gone on the clock.

Mullinalaghta corner-forwards Rian Brady and Jayson Matthews continued to torment the Stradbally defence to register another point apiece with Matthews converting a free.

The Laois champions, driven on by the powerful Colm Begley at midfield, were also dangerous in attack and two more points followed from Fitzpatrick and Dillon in quick succession.

St Columba’s got their goal in the 22nd minute when a great ball in from the captain Shane Mulligan was fielded in fine style by Aidan McElligott and the big full-forward planted a well struck shot in the back of the net to put his side 1-6 to 0-5 ahead.

Stradbally refused to be rattled and after Jody Dillon converted a ‘45’ their first goal materialised in the 25th minute when the perfect cross from Gary Comerford picked out Conor Delaney in front of the posts and he shot to the net.

The sides were now all square (1-6 to 1-6) and Mullinalaghta suffered another setback when their keeper Patrick Rogers blocked the path of Delaney in his quest for another goal and Carlow referee John Hickey awarded a penalty which appeared to be a harsh decision.

Up stepped Gary Comerford (the Cobh Ramblers soccer player) to finish the ball to the net and that was really putting it up to St Columba’s who got a crucial point in the third minute of first half stoppage time when Gary Rogers landed an excellent long range strike.

Two points behind at the break (2-6 to 1-7), a bright start to the second half for the home side yielded a score from a David McGivney free and then the Stradbally midfielder Darren Maher was sent-off which swung the issue back in favour of Mullinalaghta.

The sides then exchanged scores twice with David McGivney (free) and Michael Cunningham on target for St Columba’s (who lost wing back Conan Brady to a black card in the 39th minute) while Greg Ramsbottom and John Donohue replied for Stradbally who held a slender 2-8 to 1-10 lead until midway through the second half.

Mullinalaghta showed great courage and character to establish a firm grip in the final quarter of the game and after Gary Rogers fired over the equalising score in the 46th minute, Donal McElligott burst through for a great chance of a goal moments later but his shot was blocked down by Stradbally corner-back Jamie Kavanagh.

Five more fine points followed from Rian Brady, Shane Mulligan, Aidan McElligott, James McGivney and Donal McElligott in a glorious spell between the 49th and 55th minutes that put the issue beyond all doubt.

Gary Comerford (free) got a consolation score for Stradbally in stoppage time but it was St Columba’s who had the last say when David McGivney converted a free with time almost up and it did not matter when James McGivney was then dismissed for a black card offence.

It turned out to be a terrific debut for Mullinalaghta in the Leinster Club Senior Football Championship and no matter what happens now they have done the county really proud in crossing the first hurdle.