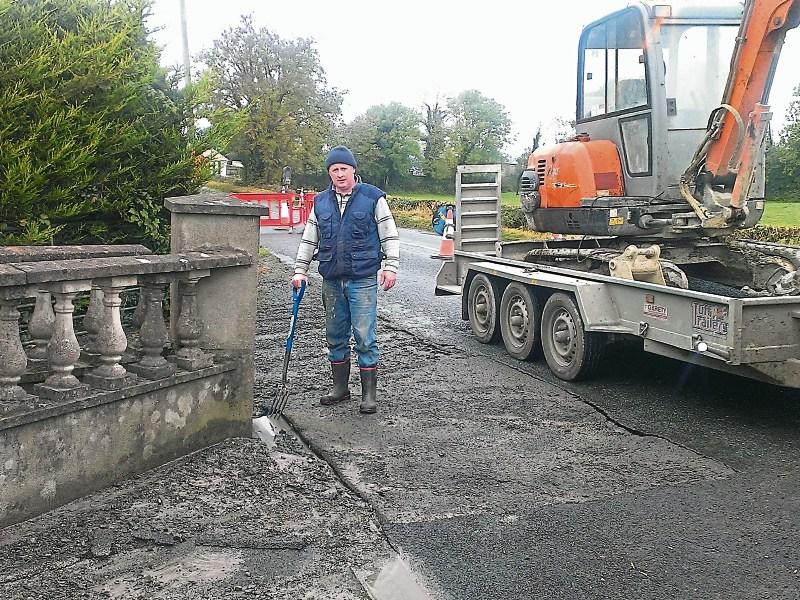 A County Longford homeowner has launched a stinging broadside at Irish Water after a mains water pipe burst outside his home for the fifth time.

John Keogh said he faces a substantial clean up bill following the rupture which occured along the main Killoe to Ballinalee road last Thursday morning.

Speaking from outside his flood damaged home, the irate retail employee said he was growing increasingly tired of claims that the water mains outside his home would be replaced.

“This morning (Thursday) I got a phone call from my  neighbour who rang me to say the burst pipe had erupted again outside the house,” he explained.

In June, the Leader featured a similar story and illustrated how flood waters had threatened to engulf Mr Keogh's home.

Armed with a shovel and wearing wellies as he battled to repair some of the damage last Thursday, Mr Keogh accused Irish Water of dragging their heels over the issue.

“About two and a half months ago it happened on a Friday and it happened again on the Saturday.

“It's all down to a very old, 40-year pipe that's running the mains from the main road here on to the village of Ballinalee and surrounding district. Irish Water said they were going to replace it from September 1.

This is now nearly the end of October and no one has arrived.”

Mr Keogh said the situation was so grave, he now dreads waking every morning to see what possibly awaits him outside his front door.

“This just can't go on to be honest,” he stormed.

“I am sitting on a timebomb. Every day I get up to see if the ground around my house is flooded.

“It's not on and something has to be done.

“I am out thousands (of euro) but fair play to my employer that they are letting me come out here and take care of the issue. What would I do if I couldn't?”

Local Cllr Micheál Carrigy empathised with the concerns expressed by Mr Keogh and  accused Irish Water of abandoning the interests of local homeowners and ratepayers.

“This work was originally supposed to be done the first quarter of 2016.

Cllr Carrigy also claimed such was the feeling of annoyance locally over the issue, he said Irish Water could have no complaints if householders opted against paying for water should charges be reintroduced.

“I have no problem paying for water but these people just aren't getting a service and somebody has to be made to answer for this,” he said.