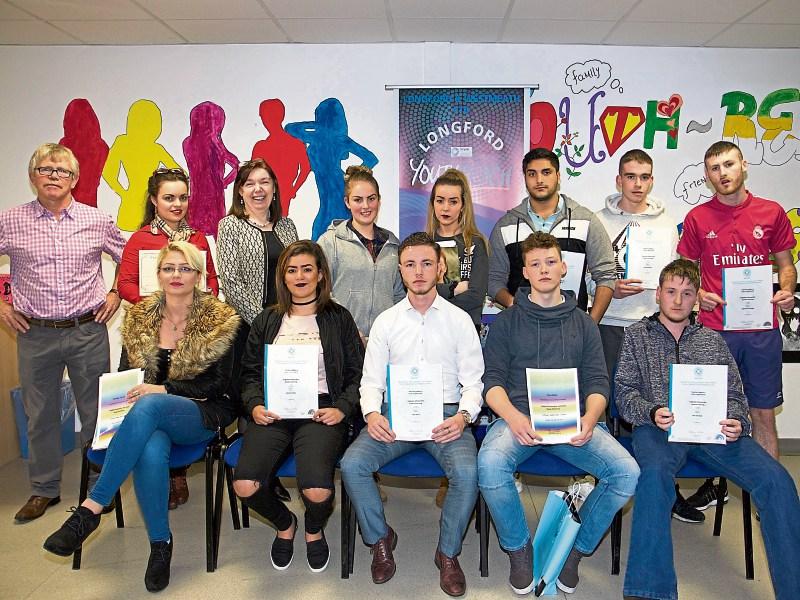 Pride and self-satisfaction were the two main emotions in rich supply at Longford’s Youthreach Centre last Thursday as the education provider held its end of year awards ceremony.

More than a dozen Quality and Qualifications Ireland (QQI) Level 4 and Level 3 certificates were handed out to students in recognition of their efforts across a variety of genres and disciplines.

There were accolades too for those who undertook courses in bakery, photography and woodwork with recognition also for the centre’s sporting achievements over the past 12 months.

At present, there are 110 Youthreach centres throughout the country which offer education and training programmes to those between 15 and 20 years of age who have dropped out of mainstream schooling with little or no qualifications to their name.

Representatives from local organisations and the wider business community were in attendance, some of whom handed out certificates to those in attendance.

Liz Lavery, Director of Secondary Schools with Longford Westmeath Education and Training Board spoke of how influential services like Youthreach can be for early school leavers.

“Schools are great places,” she told a hushed and attentive audience.

“And they are but I would be the the first to say they are not great places for everyone in that it doesn’t allow everyone to use their talents and to shine. That’s where Youthreach comes in.”

Perhaps even more absorbing was the comments made by two students, Tommy McDonagh and Chanel Ward as the pair told of how Youthreach has impacted positively on their lives.

The latter heaped praise on the centre’s “fantastic mentoring programme”, a service she believed had proven instrumental in her attempts to become a fully-fledged secondary school teacher.

“I really don’t know how I would have coped,” she said. “In my opinion, the Youthreach programme is the perfect way to resume one’s education.”

“We do a lot with the students both inside the centre and outside but the biggest thing that we try to encourage here is respect. If that is given then students will receive it back in spades,” he said.