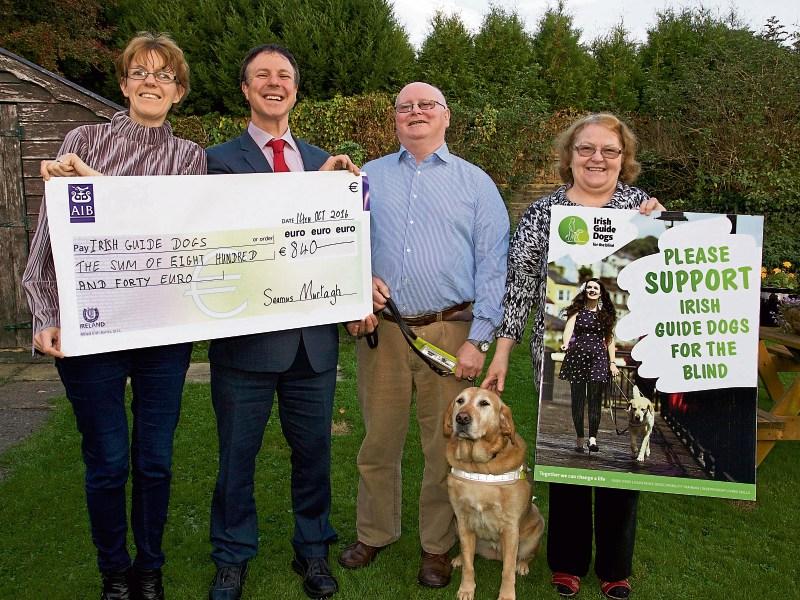 He raised €840 and chose the Irish Guide Dogs as his charity.

As a result, Seamus recently presented Jim Heavey and Zonta with a cheque for €840, a feat he is particularly proud of.

As part of his training  for the Ironman Seamus was doing up to 12 sessions a week with Longford Triathlon Club and some running with the Longford Athletic Club.

“I followed a programme from David Sheridan and he also organised getting my bike there and back safely, through his company, Ship My Tri Bike,” added Seamus before pointing out how important this had been because it made travel to and from the event in Maastricht easier for him.

“Over the spring and summer I did a lot of road races, sportive, short Triathlons and Aquathons to get sharp for the big race.

“Closer to the event I had to reduce training to get rested for the event.”

Seamus and his wife Anne travelled to Holland prior to the race where they visited friends Rudi and Els Hofland in The Hague.

After the short rest, it was time for the couple to head on and prepare for the big race.

Then on Sunday, July 31, Seamus took his place alongside 2,000 other athletes at the Swim Start. “Conditions were mild and overcast; I swam well and had a good transition to get on the bike,” he continued.

The Clondra man went on to say that conditions deteriorated on the day and rain left the course treacherous.

“I was glad to be getting off the bike and heading out on the run,” he added.

“Normally the Marathon is my favourite and I pounded the streets of Maastricht to make it back under the finishing gantry so that I could hear the words ‘Seamus, You are an Ironman’.”

In 2013 and 2014 Seamus completed Full Iron Distance Races in Northern Ireland and Athlone.

“ Both were tough events,” he added.

“But I always wanted to try the Ironman.”

Taking the opportunity to pay tribute to all those who helped him on his journey, Seamus added, “Thanks again to all my friends in Longford Tri Club and Longford AC”.