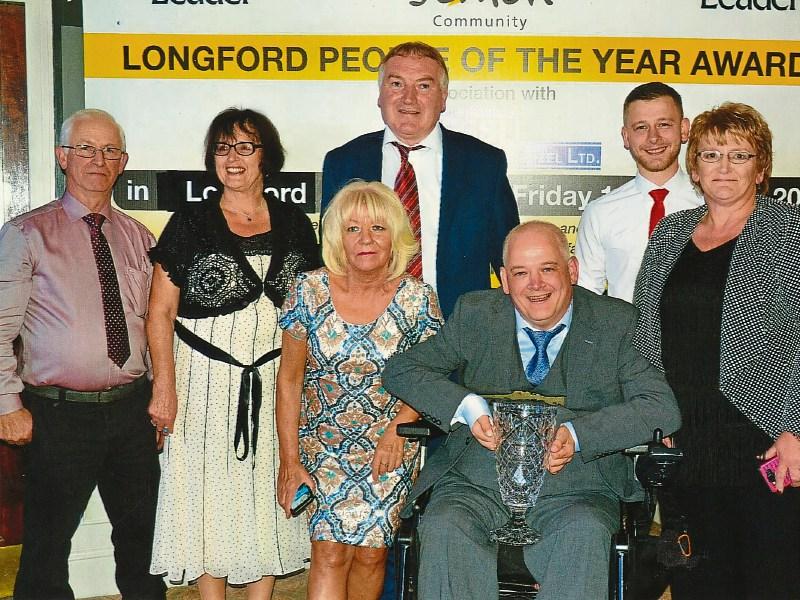 Killoe’s Victor Connell was named as the overall Longford Person of the Year award winner 2016 at Friday’s gala presentation banquet in the Longford Arms Hotel.

Organised by the Midlands Simon Community, in association with main sponsors Kiernan Structural Steel Limited and The Longford Leader, there were 600 entries submitted from members of the public for the awards and these were whittled down to a shortlist of eleven nominees, with Victor proving to be an exceptionally popular overall winner.

The Young Person of the Year award winner was talented Longford town swimmer Gerry Quinn who shattered many Irish records at the recent European Junior Championships in Hungary.

The nine other nominees, who received presentations on the night were;

It was a superb night of celebration in the Longford Arms Hotel with Tess Murphy and Tony O’Riordan speaking on behalf of the Midlands Simon Community.

The compere for the evening was Longford Leader MD Joe Flaherty, while main sponsor Frank Kiernan of Kiernan Structural Steel Ltd had the honour of announcing Victor Connell as the overall winner.

See www.longfordleader.ie for more on the awards and there will also be more photos in next week’s Longford Leader.