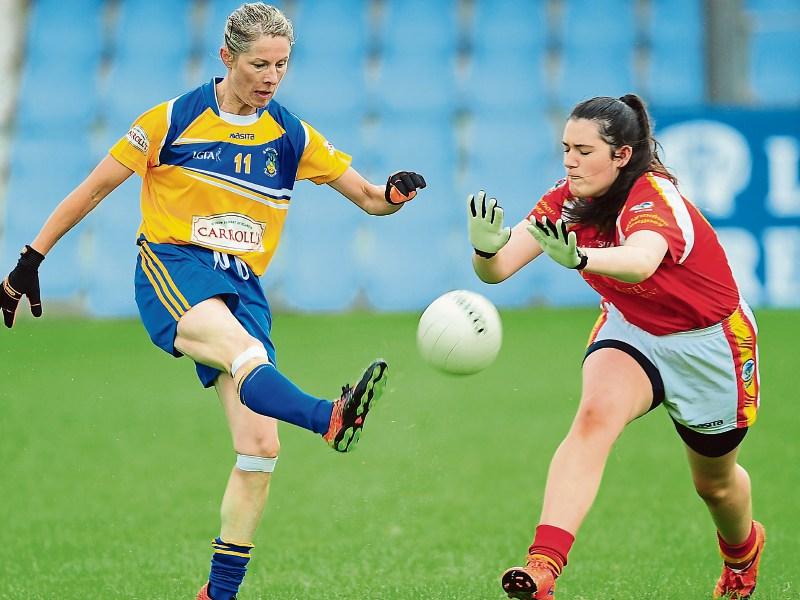 Carrickedmond's great run in the Leinster Ladies Junior Club Football Championship came to a disappointing end with a narrow defeat by Dublin opponents St Maurs at their club grounds in Rush on Saturday last.

A third away game in a row was tough for the girls who had already overcome the Meath and Wexford champions but a physical strong St Maurs side were too much for gallant Carrickedmond.

Carrickedmond, minus the influential Niamh Feeney, got off to a bright start to clock up 1-1 in the opening minutes. Emily Cullen finished to the net after a brilliant move before Michelle Noonan landed a point.

It would be 20 minutes until Carrick got their next score as St Maurs got a grip at midfield. In that spell the Dublin side were guilty of missed chances but credit must go to the Carrick defence for their work rate under extreme pressure.

Sarah Shannon equalised twice for Carrickedmond either side of a Eadaoin McGuinness score for St Maurs as Carrick went through a strong period and Carla Esler's point at the end of normal time in the first half looked as if Carrick were going to be in a good position at the break.

But it wasn't to be as St Maurs leaders McGuinness and Leonard stepped up when needed with crucial plays as they regained control. McGuinness's inch perfect pass over the top of Carrick's defence found Niamh Carthy who finished well to the net to give St Maurs the lead before Leonard extended the gap further before the break.

Carrick's promising position was dismantled in a short space of time and the point lead quickly changed to a three point deficit which was never got back as St Maurs led by 1-7 to 1-4 at half-time.

A thrilling encounter prevailed in the second half with both sides matching each other score for score. The introduction of Anne Burns to midfield improved Carrick's return on kick-outs and they got more ownership of the ball.

Inter county players Michelle Noonan and Sarah Shannon, as well as veteran Michelle Hannify and Shauna McCormack, influenced a Carrickedmond resurgence but the defence were finding it difficult to stop Olivia Leonard and she was key to everything good in St Maurs play while captain Eadaoin McGuinness was cleaning up a lot of the loose ball.

A ding-dong battle occurred for 20 minutes and the 3 point deficit was proving difficult to overcome for the Carrick ladies and it was clear that a goal would be needed. Shauna McCormack's free found Emer Powell in front of the posts and she finished brilliantly to draw the game level with 10 minutes remaining, St. Maurs 1-12  Carrick 2-9.

With momentum clearly with Carrickedmond, the next score would be extremely important and unfortunately for the Longford side it was Olivia Leonard again who caused problems resulting in a free which was duly kicked over by the clinical Naomi Clarke. Leonard then added further misery to the Carrick cause with two excellent points, bringing her tally to 7 points (6 from play).

Carrickedmond found themselves again in desperate need of a goal but couldn't break down the solid  Dublin defenders.

In the closing moment of the game with three points between the sides, full-forward Emer Powell went so close to equalising for the second time with a goal attempt but her effort was stopped along the line and the final whistle was blown. It was heartbreaking stuff for the girls and the big travelling support but a good year was had and experience was built for a senior campaign next year. St Maurs will play Suncroft of Kildare in the final.