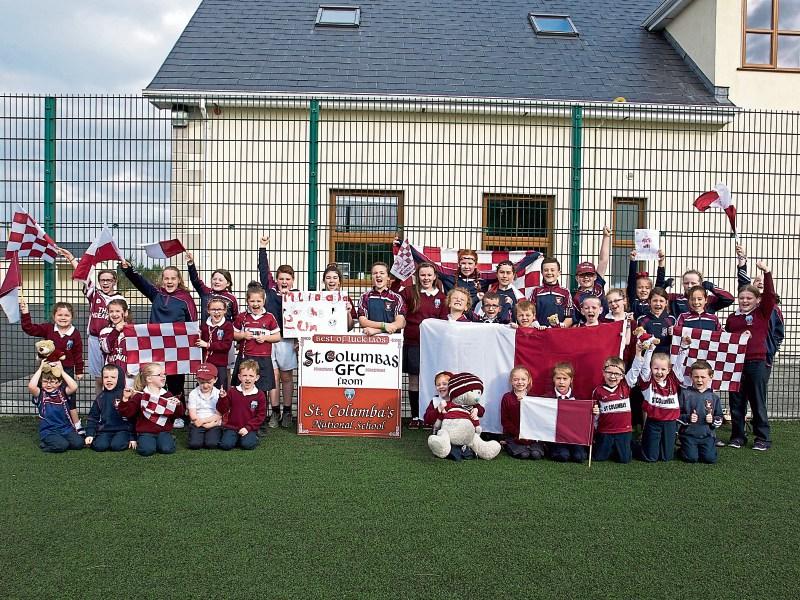 In 2014 hopes that the long gap would expire  failed when the side was beaten by Killoe, but this week pupils at Mullinalaghta National School are convinced that their side is going to win the final on Sunday.

And if the sheer determination at the school is anything to go by, then those dreams of bringing the Connolly Cup to the north Longford parish for the first time in over half a century might just be realised!

“Mullinalaghta are going to beat Abbeylara and there will be big celebrations at our school,” five-year-old Aibreán Mulligan told the Leader.

Clare Brady (6) said she was looking forward to being in Pearse Park on the day, while Jamie Matthews (7) added, “Mullinalaghta are definitely going to win”.

Over in 2nd Class, Robyn Mulligan  - who will be eight-years-old on Sunday - said she was going to the match and was “very excited” about the county final clash between Mullinalaghta and Abbeylara.

“I am going to wave my flag on the pitch at half time,” she proudly announced before confirming the ‘status quo’ at Mullinalaghta National School; “Mullinalaghta is going to win”.

Meanwhile across the classroom, 3rd class pupils found it difficult to contain their excitement about the game.

Seven-year-old James Dalton told the Leader that Mullinalaghta were in the county final next Sunday and there was no doubt - whatsoever - that the local side would bring the Connolly Cup to the school next week following their win this Sunday.

“If they win, the boys will come into school with the cup and it will be full of sweets,” the happy Kilmore native added.

For 10-year-old Finlay Clarke it’s all about match day.

“I’m definitely going to the game,” he said before pointing out that like everyone else, he was looking forward to the final.

And, sitting close to Finlay was 11-year-old Lauren Brady whose first cousin Rian is a key player on the St Columba’s side.

Over in 6th Class, Siobhán Leonard (12) and Emmet Brady - Rian’s brother -  were absolutely convinced that Mullinalaghta would win the county final this Sunday.

“Mullinalaghta are playing Abbeylara and I will be going  to the game,” Siobhán smiled.

“The lads will bring the cup to the school if they win and we will get loads of sweets and no homework!”

And for Emmet, the excitement in his house is immense.

“Mullinalaghta are going to win - there is great excitement in our house and I am really looking forward to the match”.