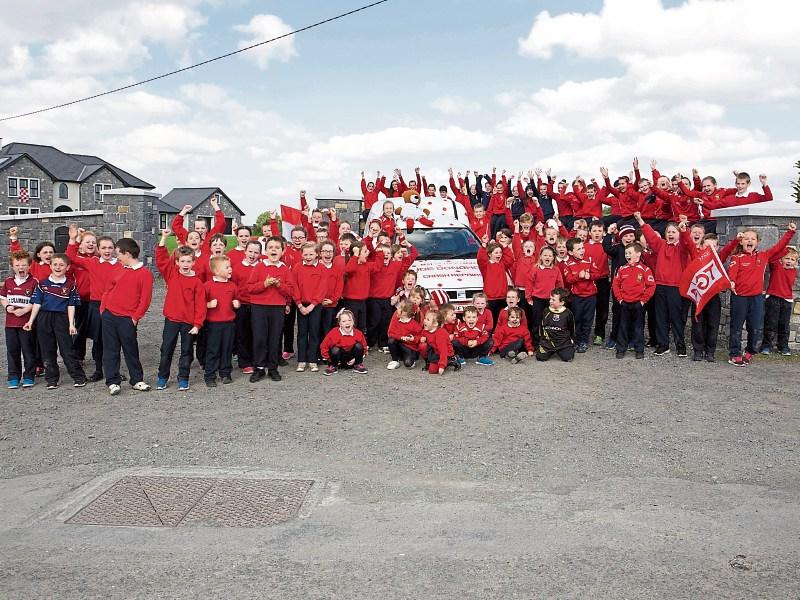 Last year Abbeylara were beaten in the SFC final by Killoe, having last won the title back in September 2006.

This year the side takes on St Columba’s Mullinalaghta in the local derby final which takes place this Sunday, October 16.

And in the heart of Abbeylara, lies Aughnagarron National School whose pupils told the Leader this week that there is absolutely no doubt whatsoever that their side will emerge victorious come 5.30pm next Sunday evening.

“Abbeylara are playing Mullinalaghta in the county final,” nine-year-old Alanna Browne told School Around the Corner this week.

“I am very excited and I’m also going to the match.

“If Abbeylara win it will be really good because we will get no homework and loads of sweets!”

For Colin Gilna (10) in 4th class, the excitement is mounting.

“Everyone is mad excited about Abbey and Mullinalaghta and everyone in the parish is going mental,” he added before pointing out that Fergal Battrim was his favourite player on the Abbeylara team.

Meanwhile, six-year-old Thomas Reilly added, “I’m happy because Abbeylara and Mullinalaghta are in the final and Abbeylara are definitely going to win”.

Over in 2nd class Anna Tully (7) said that everyone was very excited about the upcoming final.

“Last year Abbeylara were in the final and I really hope they win this year,” she added.

“Dalystown has loads of flags up for Abbey.”

Over in 6th class Rosa Lynch (12) told School Around the Corner that the excitement in the parish was really building up in anticipation of Sunday’s SFC final.

“My cousins are Kevin and Robbie Smyth - Abbeylara will win and hopefully we will get no homework,” she laughed.

Eimhin also pointed out that Liam Reilly was his favourite player and he was going to the match on Sunday with his daddy.

Four-year-old Amira McEntire’s daddy, James is a key player on the Abbeylara side and she told School Around the Corner that her dad “trains very hard”.

“I am going to the game,” she shyly told School Around the Corner.

“I will be wearing red and white; I like football.”

Meanwhile, 11-year-old Enda Battrim - Fergal’s brother - said he was very excited about the upcoming final in Pearse Park on Sunday.

“If we win, the Séan Connolly Cup will be coming to our house; I think the score on Sunday will be