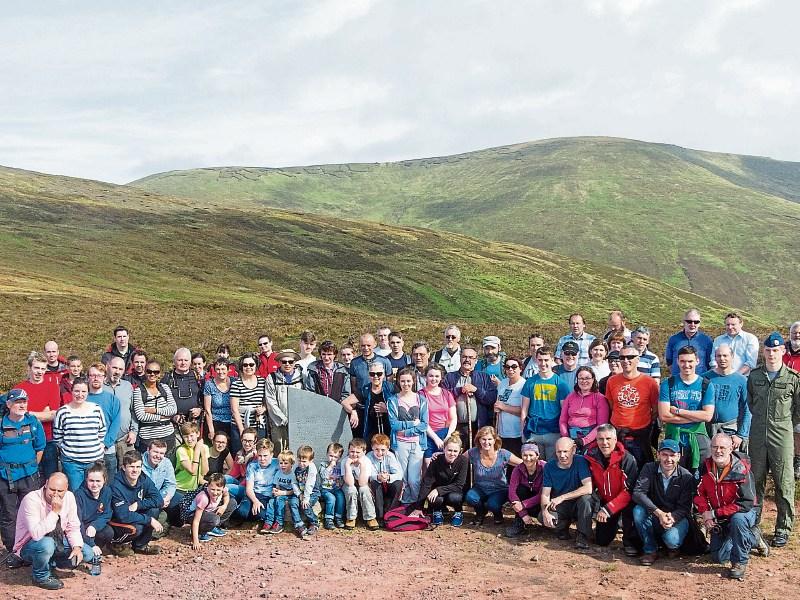 The relatives of three local men who died tragically following a light aircraft crash in 1976, came together recently for a poignant 40th anniversary commemoration event in the Galtee mountains.

The three friends and aviation enthusiasts, Tom Gannon (Dromod), Jimmy Byrne (Abbeyshrule) and Dick O’Reilly (Longford town) lost their lives on Monday, September 20, 1976, after the plane in which they were travelling crashed into Glengarra Wood.

Their relatives, along with members of the South Eastern Mountain Rescue Association (SEMRA), gathered at the site of the accident in the Galtee mountains on Saturday, September 17 last for the commemoration event.

The deceased were founding members of Abbeyshrule Air Club and were widely known, not only in Longford and Leitrim but throughout the midland area.

Tom Gannon (40) a well-known solicitor was married with a very young family. It was said of him “his smallest case was his biggest case”.

Jimmy Byrne (56) a farmer, was married with three children. Jimmy converted a section of his farm into an airfield, which was leased out to Abbeyshrule Air Club. He was involved in aviation for over thirty years and was chairman of the club.

Dick O’Reilly (63) the owner of a garage located on the Dublin road, Longford, was married with a grown up family; “Dick delighted in cheering people up and bringing a smile to their faces – a sign of a great man.”

Their ill-fated journey began on the morning of September 20 forty years ago when they took off from Kilbrittin airstrip in Co Cork bound for Abbeyshrule airfield. When the plane failed to arrive the alarm was raised in Abbeyshrule.

A search of the planned route was carried out and shortly after 5pm, an army helicopter spotted wreckage of a plane above Glengarra wood high in the Galtee Mountains in Co Tipperary.

At first light on Tuesday morning a group consisting of Gardaí, army, Civil Defence, family, friends, members of Tipperary Adventure sports club, and other local volunteers climbed to the crash site to locate and recover the three men. Helicopters then took them to Cashel hospital for a post mortem. Later that week the three were laid to rest.

In 2006 (on Sunday, October 29), a memorial stone to the three airmen was unveiled and blessed at a location just off the Black road that leads onto the Galtee Mountains.

The stone in the form of a tail section of a plane travelled from Abbeyshrule and was erected by Jimmy Mitchell, Ted McGoey, Seamus Delaney, Christopher Barry and Jimmy Barry.

The stone was unveiled by Tom Gannon, David Byrne and Joe O’Reilly, sons of the airmen, while the blessing was carried out by Fr Joe Flynn, Ballyporeen.

Prayers of the faithful were recited, three red roses were laid at the base of the stone by grandchildren and heathers were laid by friends, Abbeyshrule Air Club and SEMRA.

Forty years on and the tragic airmen are still remembered by their families and local people.

A large group of relatives and local people were accompanied by members of SEMRA on September 17 when they walked to the stone monument on the Black road.

Family members paid tributes and memories were shared in what was a very moving occasion.

Relatives could see the mountains and the crash site in the distance.This had not been possible on the day the memorial stone was unveiled ten years previously due to poor visibility on the mountain that day.

A small number of relatives and members of SEMRA continued on after the gathering at the monument to the remote crash site high on the mountain side.

The Air Corps, who played a key role in the search and recovery back in 1976, were represented at the commemoration by 2nd Lt Niall Dungan.

Roy Johnston, Chairman of South Eastern Mountain Rescue Association, reminded the large attendance that the air crash in 1976 was a catalyst to the setting up of more formal mountain rescue structures in 1977 and the development of voluntary professional mountain rescue service in the south east.

Since SEMRA was founded in 1977 they have responded to three light aircraft crashes in the south east and one in Wicklow.