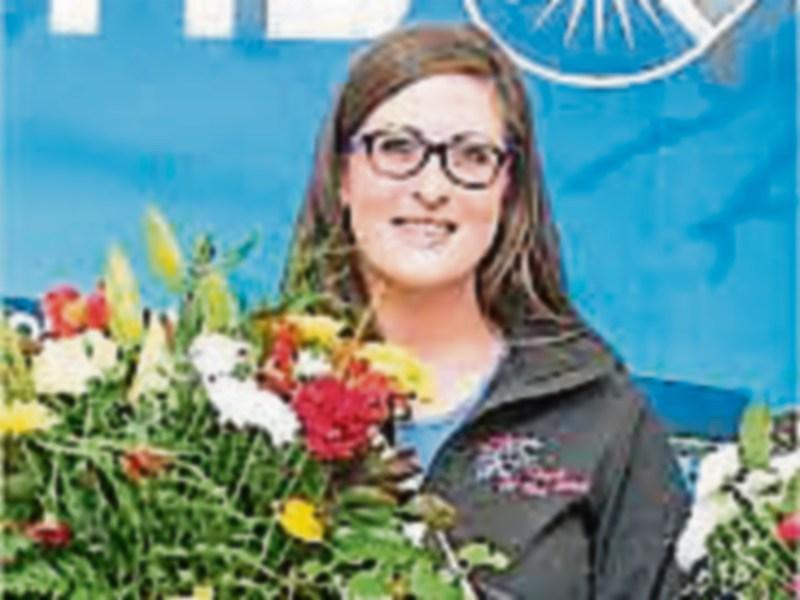 This year’s Lady Farmer of the Year is a veterinary nurse in Longford who is a native of Tang.

Irene McKiernan, who works at Longford Animal Health Centre in Shroid, took the honours ahead of more than 100 women in the Corrib Oil-sponsored event which was held at this year’s National Ploughing Championships.

Speaking to the Leader, the 25-year-old cattle and sheep farmer, who is in partnership with her father Michael, said she was delighted to receive the award and pointed to her sister’s influence over proceedings!

“It was my sister who entered me in the competition; she had to send a detailed report of my work on the farm and then shortly after that I got a phonecall to say I had made it into  the top five and could I make it to the ploughing championships on the Wednesday for the grand finale,” she laughed.

Needless to say, Irene had no trouble getting the time off for the competition and after rigorous interviews by the three judges and 'Ear to the Ground' presenter, Darragh McCullough, she was selected as the winner.

Irene, whose husband David Tormey is a suckler farmer,  received a trophy and a cheque for €1,000 as part of her prize.

She told the Leader that she plans to spend the money on additional sheep for the farming enterprise in Tang.

On the day of the final one of the competition’s judges, John Lynskey, IFA expressed his admiration for the competition and highlighted how important women were to the farming industry.

“I have no doubt,” added Mr Lynskey, “that women are a core part of the agricultural sector and sometimes their huge contribution isn’t given the attention it deserves by the rest of the sector.

“It was a difficult task to pick the winner; it was a close call in the end but it is Irene McKiernan who emerged victorious.”

The event was presented by Darragh McCullough, who is also Editor of The Farming Independent, and the judging panel comprised John Lynskey, Chairman of the IFA National Sheep Committee; Assumpta Mullin, Secretary of South Mayo Quality Lamb Producer Group and Richard Moeran, Chairman of Agri Aware.

The competition aims to highlight the importance of women in farming and the huge contribution that they make to rural life in Ireland.