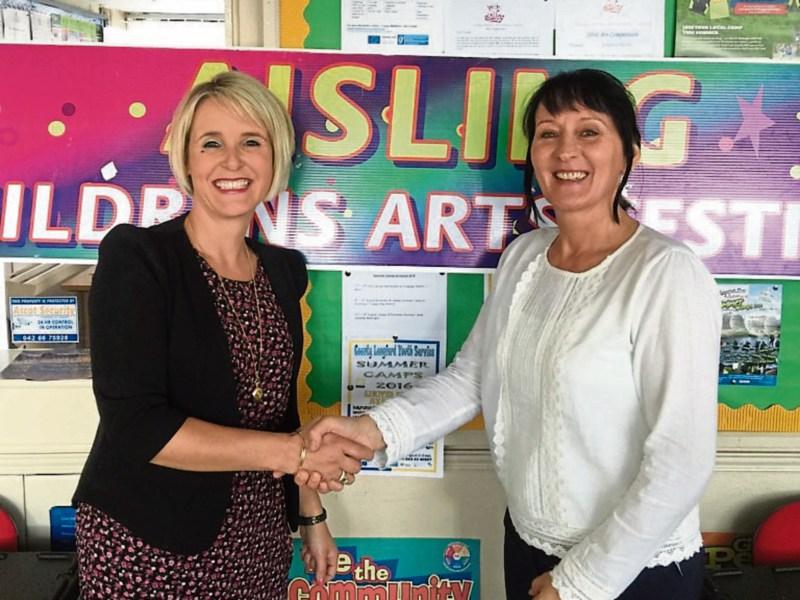 The Aisling Children’s Arts Festival have received a much-needed funding boost in recent weeks, thanks to the generosity of Longford Indoor Market.

With no funding forthcoming from the Arts Council in 2016, and a suggestion to crowdsource the event instead, the committee expressed serious worry for the festival’s future.

However, a €3,000 donation from Kathleen Smith of Longford Indoor Market, Mastertech Business Park, has made sure that this year’s event, planned for October 23 - 29, will go ahead as planned.

“Clare [Macko, Festival Chairperson] and the festival committee are extremely grateful to Kathleen and wish to thank her on behalf of all the children of Co Longford who participate every year in the Aisling Children’s Arts Festival,” a committee spokesperson said.

Kathleen herself revealed that she had reached out to the festival because their aims are very much the same as those of Longford Indoor Market and Car Boot; a desire to create a positive, social occasion for locals and to enhance the town and county.

“In this day and age when there’s so many cutbacks, it’s nice to give something back that will benefit the community,” Kathleen said, explaining that the market, which opens  Saturdays from 8am - 3pm, was proud to help the long-running festival.

“We had been at the festival last year and the year before,” Kathleen continued. “We decided to sponsor it because it’s a great festival for the town, both for kids and their parents.

“It would be a shame to see, in the future, that the festival wouldn’t go ahead.”

Meanwhile, the Aisling Festival Committee were dismayed to receive correspondence from Minister Heather Humphreys this week, which suggested that they crowdsource the event.

A spokesperson for the festival revealed that last week, the committee received an email from Minister for the Arts Heritage and the Gaeltacht, advising them to consider the ‘Fund It’ scheme.

“The Arts Council chose to spend some of its €60m on funding a study by Dr Emer Smyth of the ESRI on the benefits to children of participating in the arts and cultural activities,” the spokesperson pointed out. “We could have told them that! We’ve been running this festival for nearly 20 years and we know the many benefits children get from drama, dance, music, theatre, comedy and the visual arts.”

Referring to the “severe blow” dealt to Longford with the loss of 170 jobs at Cameron, the spokesperson continued; “Our children are already growing up in an economically disadvantaged area and it seems to be getting worse, not better.

“The children of Co Longford need and deserve the opportunity to participate in the arts.

“While we welcome the publication of the ESRI study it doesn’t change the fact that the only children’s arts festival in Co Longford did not get one cent from the Arts Council in 2016.

“And the Minister has told us to get our bikes and GO FUND IT!”