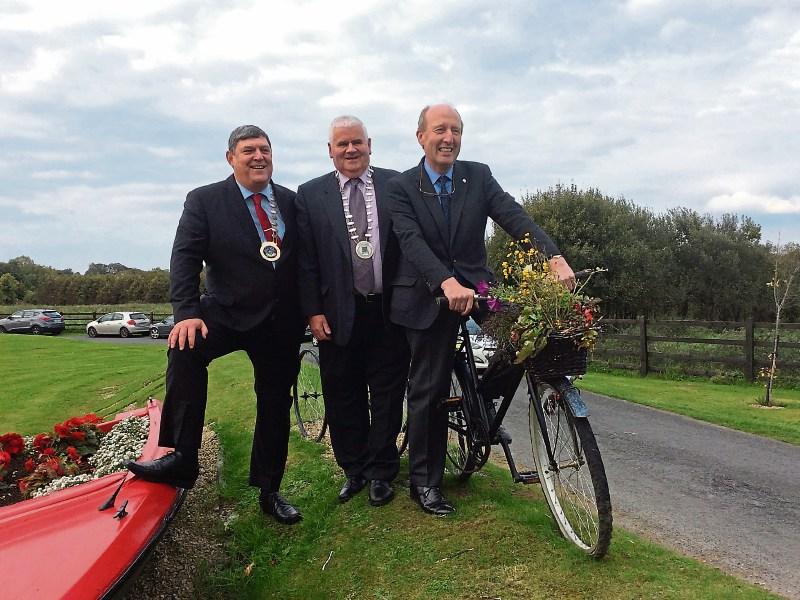 The sod was turned by Minister for Transport, Tourism and Sport, Shane Ross on the €513,000 Royal Canal Greenway from Abbeyshrule to Ballymahon during a ceremony in Ballymahon on Friday afternoon last.

The Royal Canal Greenway is a national walking cycling route linking Dublin to Clondra which is expected to be completed by the end of 2017.

Longford County Council intends to further develop this route next year along the canal to Kenagh, Killashee, Clondra and, in time, extend it to Westport and Sligo.

An additional €500,000 in funding is required for a further extension of the route from Ballymahon to Clondra and there have been calls on Minister Ross to sanction this.

The tourism plan also proposes to utilise and develop the South Longford Bogs, the Royal Canal and the Rivers Shannon, Inny and Lough Ree as a major recreational and tourism park.

The Royal Canal Greenway through Longford ties in with the Center Parcs Longford Forest holiday village to provide Longford with the best tourism infrastructure of international importance.

Speaking about the positive enhancement to the Greenways, Minister Ross said: “Since my appointment as Minister, I have been particularly struck by the far-reaching benefits that Greenways can bring to the localities in which they are situated as is evidenced by the success of the Great Western Greenway and other projects around the country.

“These benefits are not just confined to the economic realm from jobs created and sustained through the construction of the Greenways to the spend on food, drink and accommodation by those using the Greenways. They also extend to the health benefits, both physical and mental, of cycling and walking and to the environmental benefits from a reduction in emissions.”

This major tourism initiative will provide an off-road cycle route along the Royal Canal bank and is expected to substantially boost visitor numbers to Longford.

Currently the Greenway is being constructed through Westmeath to Abbeyshrule.

Now, Longford County Council is extending the route through to Ballymahon.