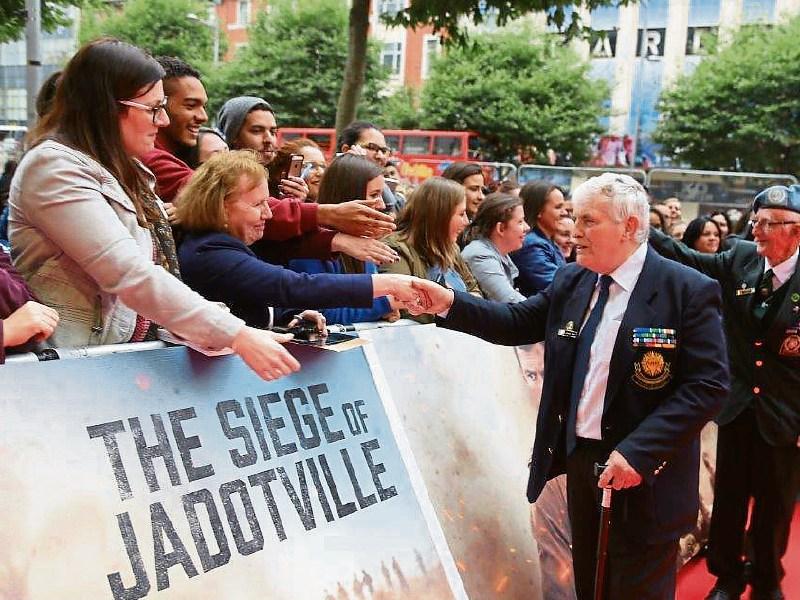 The muddy battle trenches deep in the Congo is worlds apart from the red carpet at the Savoy Cinema on Dublin’s O’Connell Street. But yet, for twelve Longford soldiers the connection between the two is substantial.

The film they were attending was the premiere of ‘The Siege of Jadotville’, a film based on a book of the same name. However, for Michael Tighe and indeed the other men who served in A Company 35th Battalion, the epic battle being portrayed on screen was a harsh reality.

“It was hell. Death flew 18 inches over your head and even to answer a call of nature you took your life in your hands,” said 77-year-old Michael, sitting relaxed in his arm chair in Annaly Park, Longford town, reminiscing over the events which led to the release of this biopic.

It’s difficult to imagine that this now father and grandfather was once an enthusiastic 22-year-old soldier, caught up in a fearsome conflict of affairs which were so far removed from the worries of his native rural Ireland.

He spent some time in England, and on return due to lack of employment in the area, Michael, like many young men at the time, joined the Army.

Going through full military training, he became a soldier and volunteered his services to peacekeeping. Describing how in 1960 he became one of the first Irish soldiers to serve overseas, he said “I volunteered for Congo service because when the Congo got its independence, trouble broke out, and the Irish Government were asked to supply a unit of troops which would be the first Irish unit to serve abroad.

“I volunteered and was successful and was eventually sent out to the Congo with the 32nd Battalion, the first Irish troops to ever be sent abroad.”

This was Michael’s first trip and is in itself a unique piece of history. What was to come however, defied all comprehension and would ultimately lead to a 55-year battle for recognition from the Irish Government.

On return from the Congo, he described feeling discontented with army life.

“Having had overseas service I found it very hard to settle back into barrack routine and I volunteered for another trip overseas with the A Company 35th Battalion. That was to prove a very eventful trip with memories to last me to the present day, some good some pretty bad.”

In the early 60s, travelling from Ireland to Central Africa wasn’t a straightforward mission. Journeying for three uncomfortable days, Michael explained: “We arrived in the Congo, transported from Baldonnel Aerodrome onto Tripoli in North Africa, then onto Northern Nigeria and then onto the Congo.”

The country was extremely unsettled, and the troops were involved in several active patrols and engagements with the mercenary officers employed to attack them by Moise Tshombe, the President of Katanga.

The conflict was centred around the mineral rich Katanga, and political unease following the declaration of a Republic, with Tshombe at the helm. Nestled deep in the heart of the conflict were the 150 Irish troops, sent by the UN to protect the small mining town of Jadotville.

Under the direction of Commandant Pat Quinlan, described as a hard task master but one who was highly respected by the troops, they set about their duties, digging trenches on his order.

While deemed unnecessary at the time, the trenches would prove to be life-saving shelters. The peacekeepers were unprepared and ill-equipped for the full scale attack which was soon set upon them.

“When we were attacked on the morning of September 13, 1961, we were attending Mass. Had it not been for the vigilance of Sergeant John Monaghan and a few others who spotted the enemy patrol coming in, it would have been worse.

“Their patrol consisted of 30 plus on foot and in Landrovers, and fully armed they opened fire. Fire was returned and they were beaten back by our troops having then occupied the trenches. Once we occupied the trenches on the 13th, we virtually stayed there for the five days of the trouble.”

The five days to follow were long and arduous, ones which Michael was not sure he would see the end of.

“We were continually bombed by heavy mortar fire, heavy machine gun fire, light machine gun fire, all sorts of live arms, French 75mm artillery piece and then the icing on the cake was the fouga magister jet aircraft came and bombed us from the air.”

Bombs rained upon them for five relentless days, the searing heat during the day, freezing temperatures at night and mosquitos offered no release. A platoon of fresh-faced and eager youngsters, the men being bombed had no real life experience, let alone lying in the mud in central Africa under heavy fire. However they displayed bravery and held strong despite being exhausted, starving, dehydrated and extremely outnumbered.

Michael continued, “Nobody in that unit had ever been involved in an experience like that before, as a matter of fact very few of them had been outside of Ireland before. But we gave as good as we got, in actual fact we punched way above our weight.”

Surrounded by three thousand men, many of whom had professional military and war experience, the 150 Irish fought back until they had nothing more to give.

“Record has it, we had none killed in action. They had 300 plus,” Michael revealed.

Running out of steam, out of ammunition and dehydrated from the heat and lack of water, they agreed to a ceasefire.

“We did not surrender,” Michael emphasised, “a ceasefire was arranged by Commandant Quinlan and the Katangese under certain conditions - one of which they would turn back on the water. They reneged on all the promises that were made, and they were made in writing.”

“In the boiling heat of the African sun, we were kept in the buses. They refused to let us off, with three guards escorting us to the toilet which resulted in a messy situation to say the least. As the sun began to set, we were still sitting in the buses; we were fried. The exchange of prisoners failed and we had to make the journey back.”

En route back to where they were being kept, they stopped in a town where Michael experienced some kindness from a local woman.

“I remember getting out and a woman gave me a piece of bread and a drink of water and I thanked her for that and more or less fell asleep where I lay on the ground.”

Returning to Kolwezi for another week, their ordeal was soon to finish as they were then exchanged as prisoners of war with the UN. They received a week's rest and were then sent back into the field to complete the rest of the tour.

Their return to Ireland was bittersweet, as what should have been an honourable homecoming was replaced with mockery and shame.

“We landed back at Christmas, no debriefing, no counselling, no nothing. You were given a ticket to whatever town you lived in with a month’s pay and a month’s leave of absence and headed off.”

Michael remembered this with angst, the surrealness of being back home as if nothing happened: “The next night you were down in the pub having a pint, having being like a coiled spring two days beforehand, waiting for something to go off. How can you re-adjust to normality after that?”

Normality wasn’t the only issue they had to contend with, as it quickly emerged they were viewed as cowards.

“Even before we came home there were snide remarks,” Michael admitted. “White feather, threw the towel in. It was obvious it wasn’t going down well with the bulk of both the army personnel and the Government.”

For fifty years, the soldiers had the charge of cowardice over their heads, with the incident being swept under the carpet, but  ‘The Siege of Jadotville’ is finally lifting the veil of secrecy, giving the public an insight into what happened.

Having being exonerated of the charge of cowardice five years ago by then Taoiseach Brian Cowen, progress is being made to recognise the soldiers’ achievements in battle. The men of Company A were recognised at a ceremony in Custume Barracks Athlone recently, which Michael also attended.

Still awaiting the  awards for which they were recommended, Michael concluded by saying: “It’s not all about awards, having the charge of cowardice cleared from over our heads was much more precious to me.

“But as the son of  the late Commandant Quinlan said to me: 'it’s not finished by a long shot'”.